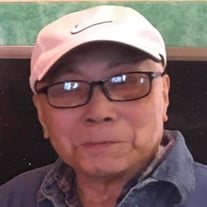 Yang, Anlun, renowned Professor of Aesthetics, Classical Chinese Literature, Western and Chinese Literary Theory, and Philosophy passed away peacefully on August 16th at 5:30 AM surrounded by his loving family. He was born on March 10, 1932, and was the proud son of the late Zuyin Yang (father) and Guoying Lu (mother). He is survived by his loving and devoted wife Yijun Zhong, his daughter Chingyen (Frank) Mayer, and his son Huaiyu Yang (Fangbing Li). He is the most cherished Ah Gong (maternal grandfather) to his precious granddaughter Emily Yarei Mayer, and the most loving Ye Ye (paternal grandfather) to his beloved grandson Leo Lecheng Yang. Lauded as a child prodigy, Anlun Yang went to the famous NO. 11 National Middle and High School in war-torn China. After attending the prestigious high school for only one year, with many recommendations from his former teachers, he passed the College Entrance Examinations of the world-famous Beijing University with distinction. He was the only student accepted into the prestigious institution from the entire Hunan Province that year. After working in Harbin Normal University for about five years, he moved to Changsha to be close to his parents, and fiancée then later on wife Yijun Zhong of nearly sixty years. Professor Yang taught at Hunan Normal University for more than forty years, served as Chairman of various departments and was on the Board of Trustees. Praised as one of the founding fathers of contemporary aesthetics in Chinese academia and beyond, Professor Yang published many books and hundreds of scholarly articles in major scholarly journals. He was a revered expert on Laozi, Zhuang zi, Pre-Qin aesthetics theory, classical Chinese study of the phenomenology of spirit, Plato, Socrates, Kant, and Hegel. A recipient of numerous distinguished book awards, Professor Yang was the pioneering founding father of a leading school of thought in aesthetics that integrates classical Chinese and leading Western philosophical, aesthetic, and literary theories. He mentored an uncountable number of students and young scholars. His former students remember him as an extremely versatile, devoted, kind, intellectually curious, passionate, and superb professor and mentor in life and their academic fields. Professor Yang founded the Hunan Aesthetics Associate in 1981, shortly after China opened up to the Western world ideologically. The establishment of the renowned Association provided a much-needed space that fostered intellectual exchanges; it was a bold and insightful accomplishment, one that has been modeled by many leading scholars in China. Professor Yang played significant roles in the Chinese National Association of Aesthetics and served on the Board for decades. His books are collected by leading universities in the West, Japan, Taiwan, and Korea. Most importantly, Professor Yang was a guarding angel to his family, a devoted, loving, trusting and supportive husband, a doting Baba (father), an endless source of inspiration and pioneering spirit, an unwavering source of encouragement and comfort to his children, a protective, encouraging, generous, and joyous Ah Gong (maternal grandfather) to his beloved granddaughter Emily whom he adored and believed in without any reservations, a cheerful and loving Ye Ye (paternal grandfather) to his young grandson Leo, a welcoming and loving father-in-law to his son-in-law Frank and daughter-in-law Fangbing, and a spoiling “grandfather” to his deceased dogs, Daisy, Duke, Koko and Mimi. His sense of humor, towering intellect yet modest demeanor, his forgiving disposition, his courageous and graceful attitude in times of adversaries, his zealous passion towards life, and his unassuming and gentle guidance when asked for made him the soulmate, emotional anchor, and mentor to his family, and especially to his daughter Chingyen Yang Mayer. He will be loved and missed forever. A memorial service was held on August 19th at 7 PM at Cannon Funeral Home. Interment will be held privately at a later date.

Yang, Anlun, renowned Professor of Aesthetics, Classical Chinese Literature, Western and Chinese Literary Theory, and Philosophy passed away peacefully on August 16th at 5:30 AM surrounded by his loving family. He was born on March 10, 1932,... View Obituary & Service Information

The family of Anlun Yang created this Life Tributes page to make it easy to share your memories.

Send flowers to the Yang family.