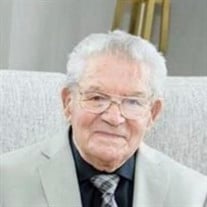 Anthony “The Count” Schiano, a dedicated family man, passed away Saturday, December 11, 2021 at the age of 97 with his loving family and “Angels” by his side. Tony, the youngest son of the late Vincenzo Schiano and Nicolina (DeSimone) Schiano, was born in Brooklyn, NY, on February 24, 1924. At the age of 7, he entered an orphanage with his youngest sister, Josephine Richute. He moved to Schenectady in 1941 and proudly served his country during WWII in China and the Pacific theater as a United States Marine. As a sergeant and platoon leader, he saw combat action in Okinawa and the Battle of Peleliu. Having been wounded in a mortar attack, he was awarded the Purple Heart and was honorably discharged in 1946. Tony returned to Schenectady and married the love of his life, Dolores A. Schiano, in 1950. Together they enjoyed 71 wonderful years. They had two children, Anthony Gerard of Syracuse and Anne of Troy, NY. Tony was the consummate family man dedicated to supporting his wife, children and relatives, no matter the cost. When his brother-in-law, Richard John Santilli, passed suddenly at an early age, Tony was there to support his sister-in-law, Joan (Arcuri) Santilli, and two sons, Anthony Michael and Richard John Santilli. His deep appreciation for family grew from his childhood experiences growing up as an orphan. He was employed by the United States Post Office in Schenectady, NY, from 1946-1983 and was inducted as a lifetime member of the National Association of Letter Carriers. Tony upon his passing was the oldest retiree from the Postal Service in the Capital Region. In addition to being employed at the Post Office, Tony ran a successful family business on Galway Lake - the Rose Garden - with plenty of shameless stories to share, as he worked to put his two children through college. He retired from the Post Office to help in raising his two grandchildren, Adam Washousky and Whitney (Vazza) Washousky, who he loved dearly. Tony was an avid golfer, bowler, cut-throat Scrabble player and expert pinochle player. He was proud to be an advocate of Boys Town, a non-profit dedicated to supporting homeless children and their families, and was recognized annually for his honorary citizenship over the past three decades. Tony is survived by his beloved wife, Dolores A. Schiano and his loving children, Anthony Gerard Schiano, Anne Schiano, son-in-law Michael Washousky, grandchildren Adam Washousky and Whitney Vazza (Rick Vazza), and great-granddaughter, Mila Vazza. Tony and Dolores would like to give special recognition to Colleen Egan, Lori Delamater and the team of “Tony’s Angels,” who cared for him over the last 6 months of his life. In lieu of flowers, Tony’s family has requested that any donations be made to Boys Town at www.boystown.org Visiting hours will be held at New Comer, 181 Troy Schenectady Rd., Watervliet, on Friday, December 17, 2021 from 4:00 to 6:00 pm. A funeral service will be held at the funeral home at 5:30 pm. Interment will be in Most Holy Redeemer Cemetery, Niskayuna, on Saturday, December 18, 2021 at 10:00 am.

The family of Anthony V. Schiano created this Life Tributes page to make it easy to share your memories.

Anthony “The Count” Schiano, a dedicated family man, passed away...

Send flowers to the Schiano family.