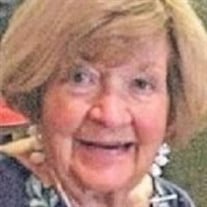 Barbara J. Grimmick, 91, passed away peacefully on September 22, 2021. Born in Lansingburgh on July 15, 1930, she was the daughter of the late Edward S. and Elizabeth (Knight) Curran. Barbara was a graduate of Lansingburgh High School and attended the Ellis Hospital School of Nursing and Union College. An active communicant of St. Augustine's Church, Barbara was a member and officer in the school's Mothers Club and the Sacred Heart Sodality as well as serving on the school's annual bazaar committee. She taught C.C.D. classes for public school children and volunteered as a Cub Scout den mother. Barbara retired from St. Mary's Hospital in Troy where she worked as director of admissions. She was a member of the Northeastern New York Admitting Manager's Association, variously holding office as secretary and vice president of the group. Following her retirement, Barbara was an active member of the St. Mary's Hospital Auxiliary, including her work in the hospital's gift shop, receiving the St. Louise deMarillac award for her service as an auxilian. Upon moving to Cohoes in 1978, Barbara became an active member of the Church of the Holy Trinity. Her volunteer work continued as a member of the Village Green Ministry, as a driver for the American Cancer Society's Road to Recovery, and as a volunteer at Mary's Corner. When not volunteering, Barbara enjoyed knitting, reading, walking, and being in the company of family and friends. Barbara was predeceased by her husband, Eugene J. Grimmick. She is survived by her sons, Eugene P. (Susan) Grimmick and David S. (Linda) Grimmick; her grandchildren, Brian (Jennifer) Grimmick, Kara Grimmick, Kathryn Grimmick, Jill Grimmick, and Megan Grimmick; her great-grandchildren, Landon and Matthew Grimmick; and her sister Carolyn (Michael) Opar. Barbara was a loving and attentive mother, grandmother, and great-grandmother who was devoted to her family. Until she was diagnosed with the illness that took her, Barbara lived her life to its fullest, at a pace that her family could only envy. She was a force that will truly be missed, leaving behind memories that will not be forgotten. A Mass of Christian Burial will be celebrated at 10 a.m. on Saturday, October 2, in The Church of the Holy Trinity, Cohoes. Relatives and friends are invited to visit at the church before the service, from 9 to 10 a.m. Interment will follow in St. John's Cemetery. In lieu of flowers, donations in Barbara's memory can be made to the Church of the Holy Trinity, 122 Vliet Blvd., Cohoes, NY, 12047.

Barbara J. Grimmick, 91, passed away peacefully on September 22, 2021. Born in Lansingburgh on July 15, 1930, she was the daughter of the late Edward S. and Elizabeth (Knight) Curran. Barbara was a graduate of Lansingburgh High School and attended... View Obituary & Service Information

The family of Barbara Grimmick created this Life Tributes page to make it easy to share your memories.

Send flowers to the Grimmick family.