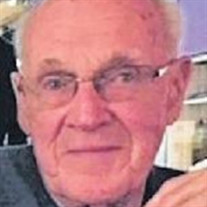 Brian Thomas Cavanaugh Sr., 86 of Latham, the beloved husband of Barbara Stack Cavanaugh, entered into eternal life on Tuesday, June 14, 2022, at Samaritan Hospital in Troy. Born in Troy and raised in Watervliet, he was the son of the late Mayor James F. and the late Margaret (Hayes) Cavanaugh Sr. Mr. Cavanaugh married Barbara Stack on January 21, 1961, and the two have shared a beautiful marriage of 61 years. Brian was a graduate of LaSalle Institute in Troy. He served in the United States Army during the Korean War from 1954 - 1956. He was a foreman, employed by Beltrone Construction Co. in Latham for over 30 years and previously worked for Machnick Builders in Green Island. After his retirement, he worked for many years at the family owned Dufresne & Cavanaugh Funeral Home in Latham. Brian was an avid N.Y. Yankees and N.Y. Giants fan. He coached little league baseball for over 10 years. He loved his family especially his grandchildren teaching each of them to swim in his backyard pool. Brian loved taking care of his home, swimming pool, time in his mancave and taking care of the backyard birds. Survivors, in addition to his wife, include his loving children, Erin (Don) Cavanaugh-Wade, Brian (Lisa) Cavanaugh, and Terry (Kimberly) Cavanaugh; his siblings, Margaret (the late John) Poulin and Michael (Kathy) Cavanaugh; his cherished grandchildren, Justin (Laurel) Crosier, Kara Cavanaugh, Dr. Kelly (Matt) Cavanaugh-Russo, Julie Cavanaugh, Maura Cavanaugh, Karly Cavanaugh and Bradley Cavanaugh; and his adored great-granddaughter, Harper Crosier. He is also survived by many dear nieces and nephews. Brian was predeceased by his brothers, James F. (the late Marilyn) Cavanaugh Jr., and Gerald (Carol) Cavanaugh; and sister, Mary Ellen (the Late Frank) Anastasi. A Mass of Christian Burial will be celebrated on Saturday, June 18, at 9 a.m. in Our Lady of the Assumption Church 498 Watervliet Shaker Rd., Latham, with Reverend Geoffrey Burke officiating. Relatives and friends are invited and may call on Friday June 17, from 4 to 7 p.m. at the Dufresne & Cavanaugh Funeral Home, 149 Old Loudon Rd., Latham. Interment will be in St. Patrick's Cemetery, Watervliet

Brian Thomas Cavanaugh Sr., 86 of Latham, the beloved husband of Barbara Stack Cavanaugh, entered into eternal life on Tuesday, June 14, 2022, at Samaritan Hospital in Troy. Born in Troy and raised in Watervliet, he was the son of the late Mayor... View Obituary & Service Information

The family of Brian T. Cavanaugh created this Life Tributes page to make it easy to share your memories.

Send flowers to the Cavanaugh family.