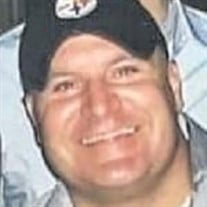 Brian F. Weaver, 51 of Little River, S.C., entered into eternal life on August 9, 2021, after a short but gallant fight with COVID-19 pneumonia. Brian was born on May 22, 1970, in Albany, N.Y., the cherished son of Robert J. and Kristine (Hansen) Weaver of Louisville, Ky. Survivors include his beloved brother, Matthew Weaver (Karel Hibbert) of Louisville, Ky., his wife, Alison Gurreri, and much loved children, Gabriella and Alex of Little River. Brian was predeceased by his precious sisters, Sarah and infant Erin; grandparents, John Sha and Bess Hobbs Weaver and Francis and Margaret Conlon Hansen. Brian also leaves behind several aunts, uncles and cousins. We would like to extend heartfelt thanks to Brian's aunt Judy Parker, aunt Patty Lipscomb and cousin Billy Ace Boardman for their help and assistance in planning Brian's Celebration of Life in New York. Brian was a graduate of Catholic Central High School in Troy, N.Y., where he played both baseball and basketball. He went on to earn his bachelor's degree at Mount St. Mary College in Newburgh, N.Y., where he continued his basketball career as captain of the team. Brian was a fantastic son, brother, nephew, cousin, husband and father who loved life and everyone he met along the way. One of his greatest pleasures was following in his dad's footsteps, coaching both football and basketball with the youth of North Myrtle Beach. He was never happier than when he was coaching his son Alex or sitting in the bleachers cheering on his sweet little girl, Gabby, at her gymnastic meets. He was the ultimate dad. His whole life revolved around his kids. As everyone knows, Brian was a lifelong Steelers fan. He loved the game of golf and played in leagues and tournaments in the Myrtle Beach area. We are grateful for the gift of Brian's life and the blessing of the time we had with him. There will be a celebration of Brian's life in Albany in early October. Arrangements have been entrusted by the family to the John J. Sanvidge Funeral Home, Inc., 565 Fourth Avenue, Troy, NY 12182 .

The family of Brian F. Weaver created this Life Tributes page to make it easy to share your memories.

Send flowers to the Weaver family.