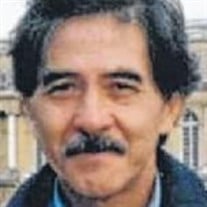 Carmen Shang passed away peacefully on February 5, 2022, after a courageous battle with cancer, with his family at his side. Carmen was born on March 9, 1935, in Bridgeton, N.J. to Donald Shang and Victoria Minniti Shang. He was raised in Bridgeton and Philadelphia, Pa. After graduating from high school, Carmen joined the U.S. Marine Corps, serving in South Korea and Japan, and rising to the rank of sergeant. He was proud of his position as a field musician and his service in the Marine Corps Band. After his military service, Carmen attended Los Angeles City College and graduated from UCLA with a degree in political science. He later moved to Albany, where he was employed as a caseworker by the Albany County Department of Social Services. He graduated from Albany Law School in 1966 and joined the legal staff of the New York State Department of Social Services, where he rose to the positions of general counsel and acting commissioner. In 1978, Carmen formed his own law firm, later known as Rubin and Shang, and practiced law until his retirement in the late 1990s. Carmen possessed a strong artistic sensibility, which he demonstrated with his glorious flower gardens. Even his "planter garden" in retirement in Arizona drew countless admiring comments from neighbors and visitors. After retiring, he fulfilled a lifelong dream of studying studio art, earning a Master of Arts in painting from SUNY Albany. Carmen is survived by his wife, Kristina Burns; his children, Jeffrey (Jean) Shang of Vancouver, Wash., Lisa Shang of Brooklyn, and Victoria Shang of Albany; seven grandchildren, Jeffrey, William, Chelsea (Eric Weisbart), Samantha, and Michelle Peason, and Anthony and Shaylin Shang; two great-grandchildren, Miya Peason and Giovanni Butler; nephews, Donald and Mark Shang; and niece, Teri Shang. Carmen was predeceased by his brother, Donald Shang; and his aunt, Carmella Minniti. Relatives and friends are invited to visit with Carmen's family on Friday, February 11, from 4 to 6 p.m. at the McVeigh Funeral Home, 208 North Allen St., Albany. Please only enter the funeral home from the rear parking lot doorway. Unvaccinated individuals must wear a mask and practice social distancing. Funeral services on Saturday at 10:30 a.m. in Christ Our Light Catholic Church, 1 Maria Dr., Loudonville where his funeral Mass will be celebrated. Masks are required. To view the Mass visit YouTube.com and search for Christ Our Light Church, Loudonville. The Rite of Committal will be held in St. Agnes Cemetery, Menands, immediately following the funeral Mass. Carmen had an abiding affection and admiration for the canine population, especially his beloved basset hounds Elmer and Ellie. In lieu of flowers, contributions may be made in Carmen's memory to the Mohawk Hudson Humane Society, 3 Oakland Ave., Menands, NY, 12204, or at www.mohawkhumane.org.

Carmen Shang passed away peacefully on February 5, 2022, after a courageous battle with cancer, with his family at his side. Carmen was born on March 9, 1935, in Bridgeton, N.J. to Donald Shang and Victoria Minniti Shang. He was raised in Bridgeton... View Obituary & Service Information

The family of Carmen Shang created this Life Tributes page to make it easy to share your memories.

Carmen Shang passed away peacefully on February 5, 2022, after...

Send flowers to the Shang family.