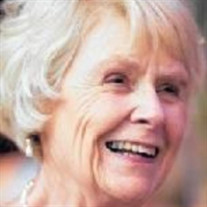 On January 6, 2022, Carolina's husband Joe called to the most beautiful girl he had ever seen that it was time for her to rejoin him. She passed away peacefully, surrounded by her family. Carolina Connors Allen was born in 1926 in Rensselaer and raised in Watervliet. She was the daughter of Francis W. Connors and Carolina Gombert Connors. Carolina was 1944 graduate of Catholic Central High School in Troy and The College of Saint Rose, undergraduate class of 1948 and master's class of 1965. In addition to being predeceased by her husband, Joseph Patrick Allen, she was also predeceased by her daughter, Carolyn Allen Meltzer; and sister, Joan Connors Nash. Carolina is survived by her brother, Francis S. Connors and his wife Carol; her brother-in-law, Richard C. Allen and his wife Dianne; her son-in law, Evan Meltzer, her daughter Elizabeth Allen Wyld and her husband John S. Wyld Jr. of Albany; her son, Joseph F. Allen and his wife, Marilou Welch Allen of Yarmouth Port, Mass.; her son, Michael P. Allen and his wife Diane Fletcher Allen of Defreestville; her son, Francis X. Allen and his wife Elaine Mendel Allen of Albany; and her son, Patrick W. Allen and his wife Diane Farrell Allen of Wynantskill. Carolina is also survived by her 15 grandchildren, Philip Meltzer and Cari; Caroline Meltzer Brody and Andrew; Elizabeth Wyld and Lynda Smith; John Wyld III and Victoria; Joseph Allen II and fiancee Krysta Kincaid; Kathleen Allen; Mary Allen and fiance Matthew Boivin; Casey Allen; Michael Allen and Mary Baroch; Kristina Allen Koonz and Matthew; Kerry Allen and fiance Kevin Lubarsky; Francis Allen Jr. and AJ; Andrea Allen; Katherine Allen Dugan and Kevin; and MC Allen. She also leaves behind eight great-grandchildren, Victoria Smith-Wyld; Connor Meltzer; Molly Meltzer; Evelyn Brody; Oliver Brody; Levi Koonz; and twins, Finn and Liam Dugan. Carolina's adventure began with a blind date and after a courtship, she and Joe were married in September of 1949. The Allen clan started to grow with the arrival of Lynn. It soon grew with the birth of Beth and Joe and Mike, the Irish twins. A few years later, Francis joined the crew and Pat rounded out the family. This happy band enjoyed camping at Thompson's lake and summer vacations on Cape Cod, first at Pinewood Village and later on as part owners of Priscilla Cottages. Also, she and Papa Joe traveled to Ireland, Spain, Hawaii and Alaska. In addition to these adventures, there were concerts, piano lessons, track meets, baseball and football games - and there was always the Bridge Club! Next came high school and college graduations, weddings, and a new round of additions to the Allen clan - grandchildren and great-grandchildren. Through all these events, Carolina exuded grace, poise and always good humor. She simultaneously balanced those family obligations with a successful and rewarding professional career first at St. Teresa of Avila School and ultimately as a teacher and administrator with the City School District of Albany. In the Albany district, she taught at Giffin Elementary and later she moved to the Academy Park administrative offices where she became responsible for the federal ESEA grant funds that provided significant educational enhancements for students throughout the district. Carolina was also a longtime member and officer of the City Club of Albany serving on the board of directors, as president of the club, and as membership chair. During these times, she developed close and lasting friendships. Carolina passed the torch of service to the club over to her daughter Beth who has served as president and continues the family tradition as the membership chair. During her tenure Carolina saw the membership of the club grow and the provision of multiple grants to community not-for-profit groups and educational institutions such as The College of Saint Rose, and Maria College. She was particularly happy to assist in the establishment of the Superintendent's Fund for the Happiness of Children in honor of former Albany School Superintendent David Brown's mother. This fund provides discretionary dollars to address emergency or special situations. The legacy will continue as Carolina's granddaughter Lizzy is the current first vice-president and is in line to become the next president of the club. Carolina, the person who was known by her grace and elegance, was always beautifully coiffed and stylish. She was proud of every accomplishment of her children, grandchildren and great-grandchildren. At her retirement party, one speaker noted that she was the absolute definition of a lady. She loved her husband Joe and gave the entire family a great example of love and marriage. Their house was filled with laughter and fun where there would be an icy Manhattan an and a cozy chair waiting for any and all who came to 464 Western Avenue. Carolina will be missed by her friends too numerous to mention. A special thanks goes to Mary Ellen Drislane M.D. for her caring and compassion for Carolina throughout the years and particularly during this difficult time. Thanks also to Heather Lawson and Christina Chapin for their care and comfort. Calling hours will be on Monday, January 10, at the Hans Funeral Home, 1088 Western Ave., Albany from 4 to 7 p.m. A Mass of Christian Burial will be held in the Parish of Mater Christi, 40 Hopewell St., Albany on Tuesday, January 11, at 10 a.m. Due to the current COVID-19 situation, please be aware that masks are required and that social distancing should be taken into account. Anyone wishing to honor Carolina may make a donation in her name to The College of Saint Rose or The Multiple Myeloma Foundation.

On January 6, 2022, Carolina's husband Joe called to the most beautiful girl he had ever seen that it was time for her to rejoin him. She passed away peacefully, surrounded by her family. Carolina Connors Allen was born in 1926 in Rensselaer... View Obituary & Service Information

The family of Carolina C. Allen created this Life Tributes page to make it easy to share your memories.