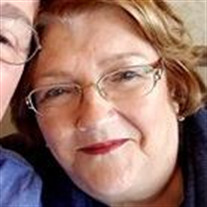 Cecelia V. Artino, 77, passed away peacefully Monday, June 21, 2021 with her loving family by her side. Cecelia was the daughter of the late Vincent and Laura Soldacki. Cecelia was the devoted wife of Carmen Artino for 55 years. Cecelia was born and grew up in Cleveland, Ohio. In 1963 Cecelia met the love of her life, Carmen. They were married in 1966 and welcomed their first daughter, Lisa, the next year. Cecelia and Carmen relocated to Albany, New York later in 1967 for Carmen’s position at The College of Saint Rose. Laura was a joyful addition the following year; Albany became their home and the place where they raised their family. Cecelia pursued a Bachelor's degree at the College of Saint Rose in Art Education. Most of her professional life was spent working in the clerical field with her happiest years being at the NYS Department of Environment Conservation. Cecelia was a very creative person as her artwork demonstrated. A Christmas or birthday gift decorated by Cecelia was, in itself, a work of art. This creativity evidenced itself in her ability to knit and crochet, a passion she shared with both her sister and granddaughter. This imaginativeness extended into the kitchen with a love of cooking. Always looking for and experimenting with new recipes, cookbooks and cooking shows were a guilty pleasure. She instilled a love of baking and cooking in her daughters, the three often sharing recipes and photos of meals cooked. At Christmas time, dozens of cookies were prepared including her famous sugar cookies, biscotti and pizzelles. She always made sure that her grandchildren’s individual favorites were baked. Cecelia was a scrapbooker who particularly loved curating pages with photos of her grandchildren and their many activities as well as trips taken together as a family. Cecelia was an avid reader and could always recommend good titles. She spent time with the same reading group for many years, the Copake Falls Ladies Literary League, where she made many friends. Cecelia loved to be with her family above all else. Many fond memories were made in the everyday gathering of meals, birthdays, graduations, recitals and sporting events. Special times were spent on annual family trips to Cape Cod where beach visits, sunsets, seafood and ice cream were mainstays. Disney World was another regular favorite, a love that started with the first visit in the 1970s with her own small family and then extended for many more decades as the family grew to include the grandchildren. Other favorite vacations included a dream trip to Italy in 2008 and a Caribbean cruise for her and Carmen’s 25th wedding anniversary. In addition to her husband, Cecelia is survived by her children, Lisa (Daniel Hernandez) and Laura (Michael Failla), as well as her four grandchildren Hannah, Jake, Leonardo and Giovanna who brought her endless joy, her sister Nadine, brother Vincent (MaryJo), sister-in-law Marilyn (Vito) as well as beloved nieces and nephews.

Cecelia V. Artino, 77, passed away peacefully Monday, June 21, 2021 with her loving family by her side. Cecelia was the daughter of the late Vincent and Laura Soldacki. Cecelia was the devoted wife of Carmen Artino for 55 years. Cecelia was... View Obituary & Service Information

The family of Cecelia V. Artino created this Life Tributes page to make it easy to share your memories.

Send flowers to the Artino family.