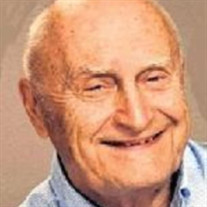 Charles O. Adams, age 89, entered into eternal life on Thursday, December 2, 2021, surrounded by the love of his family, in the comfort of his home. Born on January 6, 1932, in Cohoes, Charles was the son of the late Omer and Catherine Harrison Adams and was the beloved husband of Rosalie A. Della Rocca Adams to whom he was married on June 29, 1957. Raised in Watervliet, Charles attended the former St. Patrick's Grammar School and was a graduate of Catholic Central High School, class of 1949, and later Siena College in Loudonville where he received a B.A. degree in economics. An Army veteran of the Korean War, Charles served our country proudly from 1953 until 1955. Charles was employed by the Watervliet Arsenal for over 40 years and retired, as a program analyst, in November of 1989 from the Benet Laboratories there. He was a member of the Knights of Columbus and the Holy Name Society of the former St. Brigid's Church in Watervliet and was a communicant of the Immaculate Heart of Mary Parish in Watervliet. Charles served as a lector and eucharistic minister at both parishes and served as a member of the Prison Ministry and the Albany Cursillo. In addition to his wife, survivors include: his daughter, Mary (John) Huether of Rochester; five sons, Peter (Danette) Adams of Dallas, Texas, John (Mary) Adams of Durham, N.C., Joseph (Donna) Adams of Averill Park, Christopher (Deborah) Adams of Baldwinsville, N.Y., and Paul (Patrice) Adams of Colonie; and a special niece, Cate Dolan. Also surviving are ten grandchildren, four great-grandchildren and several nieces and nephews. Charles was predeceased by his sisters, Mary (C. Frederick) Tallman, Jean (Robert) Corey and Therese (Edward "Ned") Abbott; brothers, Edward (Ann) Dolan and George (Phyllis) Pickett; and his aunt, Mary Pickett, who raised him as her own. A special thank you is offered to the wonderful caregivers, who were so dedicated to Charles over the past three years. A funeral Mass will be con-celebrated on Tuesday, December 7, at 10 a.m. in the Immaculate Heart of Mary Parish Church, Watervliet. The Rite of Committal and interment will follow in St. Agnes Cemetery, Menands. Friends are invited to attend and may also visit at the Immaculate Heart of Mary Church on Monday, December 6, from 3 until 6 p.m. Please note that the wearing of face masks is requested, regardless of vaccination status, to both the visitation and Mass. Contributions may be made to the Immaculate Heart of Mary Church, 2416-7th Ave., Watervliet, NY, 12189 or The Community Hospice, Gift Processing Center, 310 S. Manning Blvd., Albany, NY, 12208 in memory of Charles O. Adams.

Charles O. Adams, age 89, entered into eternal life on Thursday, December 2, 2021, surrounded by the love of his family, in the comfort of his home. Born on January 6, 1932, in Cohoes, Charles was the son of the late Omer and Catherine Harrison... View Obituary & Service Information

The family of Charles O. Adams created this Life Tributes page to make it easy to share your memories.

Send flowers to the Adams family.