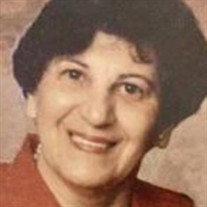 Christina (Marsicano) Bradt, 90, passed away after a brief illness on April 17, 2022 with her loving daughter by her side. She was predeceased by her husband, Ray and infant son Jimmy. Chris was born in an ice storm on Christmas Eve 1931, and returned to her Lord on Easter Sunday 2022 as snow flurries dotted the April sky. She was the daughter of the late Mary (DeMatteo) and Salvatore (Sam) Marsicano. Chris grew up in Schenectady and was a 1950 graduate of Nott Terrace High School. At school, Chris sang in the choir, was active in sports, and was a member of the National Honor Society. Chris and her friends would spend summers having fun at Caroga Lake, Sacandaga Lake, and Lake George. She also enjoyed trips to Hampton Beach, NH and taking the bus to NYC on the weekend to see the shows at Radio City Music Hall. Her biggest adventure was a cruise to Bermuda with her girlfriends in 1953. Following high school, Chris worked for the Easter Seals non-profit organization. She then took a job with the Department of Defense- Rochester Ordinance Division located at the ALCO plant in Schenectady. It was there on the tank test track in 1954, while handing out paychecks, that she met her future husband, Ray. Chris and Ray were married on October 7, 1956 and built their home near McCormick’s Corners in Guilderland. It was here she would spend the next 66 years raising a family and keeping a beautiful home. Chris dedicated her life to making others happy, especially her family. Family meant everything to her, in particular; Saturday night dinners at her parent’s crowded kitchen in Schenectady, trips to Bainbridge to visit her beloved Aunt Thereasa and Uncle “Chief” (Emelio) DeMatteo and their family, and gatherings with her cherished sister, Connie and brother-in-law, Johnny Cammarene and their children. In her later years she was blessed to have the friendship of Kathi Cannone who brought her communion, listened to her stories, and became a part of Chris’s extended family. Survivors include her daughter, Laurie and husband Robert Sparaco, her sister, Concetta (Connie) Cammarene, nieces; Chris Cammarene-Wessel (Richard Wessel), Valerie (Shawn) McCloskey, her nephew, John Cammarene, and several cousins, great nieces and nephews. A calling hour will be held on Friday, April 22, 2022 from 8:30am-9:30am at the DeMarco-Stone Funeral Home, 5216 Western Turnpike, Guilderland, NY 12084. A Mass of Christian burial will take place at 10am at St. Madeleine Sophie Church, 3500 Carmen Rd., Guilderland, NY. Burial will follow at Most Holy Redeemer Cemetery in Niskayuna.

Christina (Marsicano) Bradt, 90, passed away after a brief illness on April 17, 2022 with her loving daughter by her side. She was predeceased by her husband, Ray and infant son Jimmy. Chris was born in an ice storm on Christmas Eve 1931, and... View Obituary & Service Information

The family of Christina C. Bradt created this Life Tributes page to make it easy to share your memories.

Christina (Marsicano) Bradt, 90, passed away after a brief illness...

Send flowers to the Bradt family.