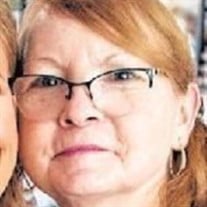 Colleen Ann (Handerhan) Carnegie, 61, died peacefully on Monday, October 11, 2021, at Samaritan Hospital in Troy with her family at her side. She was born in Albany on November 28, 1959, the daughter of the late Donald A. and Beverly A. Kayser Handerhan Sr. She was a graduate of Menands School and Guilderland High School, class of 1977. She later graduated from the Albany Memorial Hospital School of X-Ray Technology. Colleen was employed for over 40 years as the chief X-ray technologist at Albany Memorial Hospital and was the past program director of the School of X-Ray Technology at Albany Memorial Hospital. She was a communicant of St. Joan of Arc Church in Menands and was a past church school teacher. Colleen loved her many trips to Disney World and enjoyed a good Hallmark Movie. She was the beloved wife of 30 years of Mark J. Carnegie; devoted and loving mother of Sara K. (Jonathan) Slocum of Mount Pleasant, S.C. and Jason K. Carnegie of Menands; adored grandma of Spencer, Simon and Eloise "Ellie" Slocum; dear sister of Donald A. (Amy) Handerhan Jr. and Susan E. Handerhan both of Menands and the late Michael J. Handerhan (wife Lori Handerhan of Stillwater survives); and sister-in-law of Shelly A. (Mark) Wykes of Guilderland. She is also survived by several nieces, nephews, grandnieces, grandnephews and her beloved cat "Nani." The funeral Mass will be on Saturday at 9 a.m. in St. Joan of Arc Church, 76 Menand Rd, Menands with Reverend Edward Kacerguis officiating. Interment will follow in St. Agnes Cemetery, Menands. Relatives and friends are invited and may call at the Parker Bros. Memorial, 2013 Broadway, Watervliet on Friday from 4-7 p.m. In lieu of flowers, contributions may be made to Idiopathic Pulmonary Fibrosis Foundation, 21301 S. Tamiami Trail, Suite 320 PMB 226, Estero, FL, 33928, or ipffoundation.org.

Colleen Ann (Handerhan) Carnegie, 61, died peacefully on Monday, October 11, 2021, at Samaritan Hospital in Troy with her family at her side. She was born in Albany on November 28, 1959, the daughter of the late Donald A. and Beverly A. Kayser... View Obituary & Service Information

The family of Colleen A. Carnegie created this Life Tributes page to make it easy to share your memories.

Send flowers to the Carnegie family.