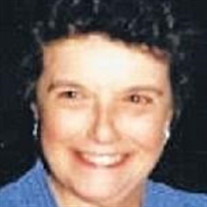 Constance "Connie" Sewell Galloway, age 91, died in Ossining, N,Y., on March 16, 2022, surrounded by her loving family. Born on February 23, 1931, in Albany, N.Y., she was the daughter of Edward and Mary (Reilly) Sewell. She is survived by her sister, Eileen Sewell, of Bath, N.Y.: her son, Charles, of Scotia, N.Y.; her daughter, Patricia (Robert) Huerster, of Pleasantville, N.Y.; and her grandchildren, Molly Huerster, of New York City, Stephen Huerster, of Boston, Mass., and Edward Huerster, of Pleasantville, N.Y.; as well as five nephews and their families; and her sister-in-law, Elizabeth Galloway, of Buffalo, N.Y. Constance is predeceased by her husband of 40 years, Charles Daniel Galloway. Constance attended the Vincentian Institute from kindergarten through high school and graduated from the College of Saint Rose, where she met her future husband, Charlie, at a Newman Club dance. It was love at first sight, and they married in 1954. Constance taught at the Mildred Elley School in Albany, until her first child was born. Constance raised her family in Glenville, N.Y., where she and Charlie made their home. She enjoyed being part of the General Electric community and supported her husband's engineering career. She loved entertaining and made every occasion festive. Constance was an active member of the parish of the Immaculate Conception Church, where she taught CCD for many years, was a eucharistic minister, and served as a member of the Parish Council. Constance was a docent at the Schenectady Museum and a member of the Saint Rose Alumnae Association, the American Association of University Women, the Burnt Hills-Ballston Lake PTA, the Schenectady Inner City Mission, and the Interfaith Community. In addition, she was a past president of the Schenectady chapter of the Saint Rose Alumnae Association. Constance was a devout Catholic who lived her faith with conviction. She took pride in her Irish heritage and instilled that pride in her family. Constance was a good listener, a wise friend, and a generous soul. She was a voracious reader with wide-ranging tastes. She passed on her love of learning to her children and grandchildren and encouraged them to pursue their interests. Constance's wit, humor, and curiosity made her a lively conversationalist. Whether chatting over a cup of tea or mingling at a cocktail party, Constance's genuine interest in other people was always evident. Annual trips to Cape Cod, a tradition Constance started with her husband, became a highlight of her family's year. Dogs were an essential part of Constance's life, and her last dog, Pippin, was a faithful companion. Constance's family is grateful to the staff at Cedar Manor Nursing Home for the care and kindness they showed her as her health declined. Constance's family will receive friends on Saturday, April 30, from 9-10:30 a.m. at the Glenville Funeral Home, 9 Glenridge Road, Scotia, NY. A funeral Mass will follow at 11 a.m. at the Church of the Immaculate Conception, 400 Saratoga Road, Glenville, NY, followed by a graveside ceremony at Most Holy Redeemer Cemetery.

Constance "Connie" Sewell Galloway, age 91, died in Ossining, N,Y., on March 16, 2022, surrounded by her loving family. Born on February 23, 1931, in Albany, N.Y., she was the daughter of Edward and Mary (Reilly) Sewell. She is survived by her... View Obituary & Service Information

The family of Constance " Connie" Galloway created this Life Tributes page to make it easy to share your memories.

Send flowers to the Galloway family.