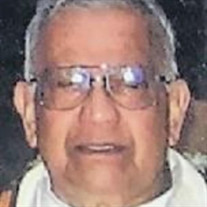 Reverend Cyril F. Pereira, 93 of Troy, entered eternal life on February 6, 2022, at the Teresian House, in Albany. A native of Bombay, India, where he was born and raised, Reverend Cyril attended St. Alphonse's Theological College and became an ordained priest of the Redemptorist Order in India in 1954 for 17 years prior to emigrating to the United States in 1970. He came to the Albany Diocese in 1971 and served as an associate at the former St. Mary's Church in Troy, the former St. Patrick's, and St. Brigid's in Watervliet. He served as pastor of St. Cecilia's in Warrensburg and the former St. Patrick's in Troy. Father Pereira, who retired in 2000 said "there is no higher calling" than the priesthood. Father is survived by several nieces and nephews. Besides his parents, the late Andrew B. and Josephine I. Pereira, he was also predeceased by his sisters, Sister Mary Edith, Sylvia DeCunha and Cleophas Pereira; and his brother, Quentin Pereira. The Liturgy of Christian Death and Burial will be on Monday, February 28, at 11 a.m. in St. Anthony of Padua Shrine Church, 28 State St., Troy. A period of visitation will precede the funeral Mass from 9 to 11 a.m. at the church. Entombment will follow in St. Mary's Cemetery, Troy. Flowers are gratefully declined. Contributions in Reverend Cyril's memory may be made to: Missionary of Charity, 335 East 145th St., Bronx, NY, 10451 or Catholic Relief Services, P.O. Box 17122, Baltimore, MD, 21203. Arrangements have been entrusted to Riverview Funeral Home, Inc., Troy.

The family of Rev. Cyril Pereira created this Life Tributes page to make it easy to share your memories.

Send flowers to the Pereira family.