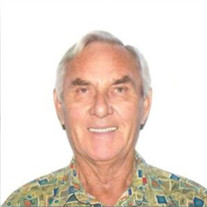 Dietrich (Dick) Alfred Harbers, 93, passed away January 29, 2022 at Cooperstown Center after a long battle with Alzheimer's. Born in Kiehl, Germany, as the firstborn of 10 children to the late Minna Maria (Wisser) Harbers and Diederikus Altman Martin. He was the husband of the late Gradselle (Grace Gallo) Harbers. Together Dick and Grace were devoted parents to two sons. Dick was a wonderful father who taught his sons about the different cultures of the world and made life fun. He was in the Army National Guard and was employed until retirement at the Albany Pork Store in Schenectady where he always arrived in the early morning hours whistling and singing while preparing the meat products for the day. Dick's most passionate and precious things he would enjoy throughout his life was reading books that were of interest to him and his passion to explore adventurous things in the world. With his reading and writing skills, it enabled him to write letters to his siblings in life telling of his personal stories by expressing his words with feelings and humor. In addition to reading, he also enjoyed listening to the music of Mozart, Bach, Andre' Rieu, Herb Alpert and was an exceptional artist and model builder In addition to his parents and wife, he was predeceased by his siblings Sigrid Jansen and Albert Harbers. Dick is survived by his devoted sons, Hans (Yvonne) Harbers, Klaus (Alina) Harbers, grandchildren Hans (Susan) Harbers, Heidi (Jason Rotter) DiDonato, Kristine Harbers, Richard Harbers and many great grandchildren, siblings Helge Hull (TN), Harbert (Renate) Harbers (AUS), Ursula (Joern) Hagemann (AUS), Brunhilde van Langen (GER), Heidi Hardlitscke (AUS), William Harbers (AUS) and Theda Minsen (GER). Relatives and friends are invited to a visitation on Saturday February 5th from 10am-12pm at New Comer Cremations & Funerals, 343 New Karner Rd, Colonie NY. Interment to immediately follow in Most Holy Redeemer Cemetery.

Dietrich (Dick) Alfred Harbers, 93, passed away January 29, 2022 at Cooperstown Center after a long battle with Alzheimer's. Born in Kiehl, Germany, as the firstborn of 10 children to the late Minna Maria (Wisser) Harbers and Diederikus Altman... View Obituary & Service Information

The family of Dietrich A. Harbers created this Life Tributes page to make it easy to share your memories.

Send flowers to the Harbers family.