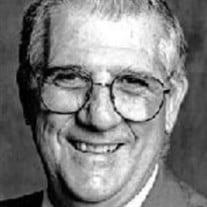 Dominick J. DeCecco, a noted educator, legislator, and community worker, passed away on February 15, 2022. Dominick was the son of Anthony and Mamie DeCecco and was born in Bronxville, N.Y. on June 24, 1936. He was predeceased by his wife, E. Patricia Becker DeCecco. He is survived by his three children, Andrea Lockwood (Allan), David DeCecco (Meredith Turetz) and Michael DeCecco (Elizabeth). He has six grandchildren: Evan and Kailey Lockwood, and Dominick, Eli, Jonah, and Frank DeCecco. Dom graduated from Albany State College for Teachers with an A.B. and M.A. degree and went on to acquire 80 hours beyond the master's degree at numerous universities. He was a social studies teacher and district social studies supervisor for the Bethlehem Central School District for 36 years. He also was adjunct professor at SUNY Albany for 12 years. As teacher and supervisor, he initiated many in-service programs on the Holocaust, Latin America, Canada, Western and Eastern Europe and Asia. He was awarded Outstanding Social Studies Supervisor by the N.Y.S. Social Studies Supervisory Association in 1987 and received the Robert Neiderberger Award from the Capital District Council for the Social Studies. Dominick was awarded a grant from the U.S. State Department to participate in a teacher interchange program at the East-West Center at the University of Hawaii. He was also awarded numerous fellowships and awards, including a GE Economics Fellowship, N.Y.S. Master Teacher Grant, The Project on Social History and an Advanced Placement Scholarship to Columbia University. He was elected to Who's Who in American Colleges and Universities and Phi Delta Kappa. Dominick was a member of NEA, NEANY, AFT, UUP, and NYSUT. He also was a member of numerous professional associations including the National, State and Capital District Councils for the Social Studies. He was a tutor for Empire State College and a rater, writer and reviewer for the N.Y.S. Department of Education. He was also a consultant and reviewer for numerous social studies textbooks. Dom served on the Bethlehem Zoning Board of Appeals, the Bethlehem Planning Board and many other local committees. He was president of the Kiwanis Club of Delmar and lieutenant governor for the Capital Division of Kiwanis. He was the developer of the Kiwanis Bells of Life Fund Drive, which has donated over $500,000 to the Pediatric Unit at the Children's Hospital at Albany Medical Center. He had a lifelong passion for music, especially opera, and was a member of the Capital Hill Chorus and the Mendelssohn Club of Albany. He was a season ticket holder and contributor to the Saratoga Opera, Glimmerglass Opera and Sarasota Opera. In addition to opera, Dom and Pat enjoyed all forms of theatre. Dom was elected to the Albany County Legislature, representing the 38th and 33rd Districts of Bethlehem and New Scotland. He was a co-sponsor of Project Access, which tries to ensure parking spots for handicapped individuals during holiday seasons. He was also a co-sponsor of the original ISTEA Enhancement proposal, which attempted to get funds to develop a bike/hike path along the CP railroad right of way. Dom and Pat traveled around the world, which formed the basis for his insistence that global education be incorporated into the entire K-12 social studies curriculum at Bethlehem Central. It also was the reason for joining Kiwanis International for its focus on serving the children of the world. Friends and relatives may call on Friday, February 18, from 4-7 p.m. at the Applebee Funeral Home, 403 Kenwood Ave., Delmar. There will be a memorial service in the Applebee Funeral Home on Saturday, February 19, at 10 a.m., followed by a graveside service in the Calvary Cemetery in Glenmont. Masks will be required in the funeral home. In lieu of flowers, please make a donation in Dom's name to the Delmar Kiwanis Foundation, P.O. Box 121, Delmar, NY, 12054, or to the Bethlehem Endowment Fund, c/o Bethlehem Central High School, 400 Delaware Ave., Delmar, NY, 12054 or to the Bethlehem Central Community Foundation, c/o the Community Foundation for the Greater Capital Region, 2 Tower Place, Albany, NY, 12203. applebeefuneralhome.com

Dominick J. DeCecco, a noted educator, legislator, and community worker, passed away on February 15, 2022. Dominick was the son of Anthony and Mamie DeCecco and was born in Bronxville, N.Y. on June 24, 1936. He was predeceased by his wife, E.... View Obituary & Service Information

The family of Dominick J. DeCecco created this Life Tributes page to make it easy to share your memories.

Send flowers to the DeCecco family.