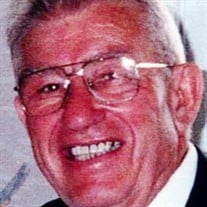 Donald (Doc) W. Savage, 92, passed peacefully with his family at his side on November 23, 2021. Born in Albany, N.Y. in 1929, he was the son of the late Donald and Frances (McCoy) Savage. He was raised in Johnstown and was a graduate of Johnstown High School. He received recognition as a star athlete, a four-year letter winner in three different sports. He enlisted in the US Navy in 1948 and served until 1950. Upon discharge, he was offered the opportunity to try out with the Brooklyn Dodgers, but was called back to serve in the Korean War until discharge in 1953. While stationed in Hawaii, he met Blanche Harbison, a Navy WAVE. They married in 1952, and after discharge in 1953, returned to the Capital District where they remained until Donald’s retirement in 1987. He was employed by Niagara Mohawk for 34 years, retiring as a line supervisor. He was a dedicated, loving father that worked tirelessly to provide for his eight children. Upon retiring, they moved to Rotonda West, FL, where they remained until Blanche’s passing in 1999. During this time, they enjoyed traveling in their RV, visiting family and friends alike, as well as helping their children and grandchildren along the way with their many projects. He was a devout Catholic and past member of the Knights of Columbus. In 2001, Donald reconnected with Joan Frasier, a former high school friend, and in July 2002 they were married. Considered snowbirds, they spent winters in Dania Beach, FL and returned to Johnstown, NY during the warmer months. He is survived by his wife of 19 years, Joan M. Savage of Johnstown. He was the devoted father of Katherine (John) Hale of Melrose, Charles (Lynn) Savage of Liverpool, Stephen (Joann) Savage of Ballston Lake, Victor (Lisa) Savage of Colonie, Peter Savage of Blountville, TN, Michael (Ina Fales, fiancee) Savage of Bradenton, FL, Richard (Gina) Savage of Colonie and Donna (Rodney) Kinkaid of Ballston Lake. Also, survived by his brother, William (Joanne) Savage of Hendersonville, NC. He was a loving grandfather to 19 grandchildren, 11 great-grandchildren (a 12th due May) and 1 great-great grandchild. He was preceded in death by his wife of 47 years, Blanche, his sister, Jean Kentris, and grandson, Eric Savage. Funeral services will be Wednesday at 11:30 am at All Saints on the Hudson Church, 121 North Main St., Mechanicville. Interment will follow in Our Lady of Angels Cemetery, Colonie Relatives and friends may visit at the Philip J. Brendese Funeral Home, 133 Broad St., (Rte. 32,) Waterford on Tuesday from 4-7 pm.

Donald (Doc) W. Savage, 92, passed peacefully with his family at his side on November 23, 2021. Born in Albany, N.Y. in 1929, he was the son of the late Donald and Frances (McCoy) Savage. He was raised in Johnstown and was a graduate of Johnstown... View Obituary & Service Information

The family of Donald W. Savage created this Life Tributes page to make it easy to share your memories.

Send flowers to the Savage family.