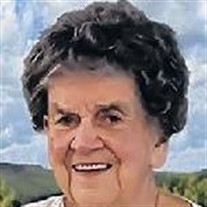 Dorothy M. Huerter, 87, a former long-time resident of Ballston Lake, passed peacefully into eternal life on Tuesday, March 22, 2022, surrounded by her loving family after a long and courageous battle with heart disease. Born in Chicopee, Mass. on June 9, 1934, Dorothy was a daughter of the late Ernest and Esther (Mason) Perreault. She was raised in Chicopee, Mass., and was a graduate of Chicopee High School, class of 1951. After high school, she worked for American Bell Telephone Co, The Armory, and then Chicopee Mfg., before devoting her time to raise her family. In 1954, Dorothy married Robert W. Huerter, and they lived in Granby, Mass. until 1967. Due to a work transfer with Wilson Freight Co, in 1968, Bob and Dorothy moved their young family to Ballston Lake, when their new home was completed. While Bob was busy working as owner and president of Tanney's Motor Transportation, Dorothy was the CEO of their home, but nothing kept them both from lovingly supporting all of the many activities of their five children. Dorothy and Bob enjoyed traveling on family camping trips and later in their RV to Canada, many U.S. states and flying abroad to places like Germany. Their favorite trips were the annual summer vacations spent on Cape Cod with their children and grandchildren. Dorothy will be remembered for her incredible devotion to her family and her strong support of all the teams her children and grandchildren participated on. She loved playing cards with her children and grandchildren and for years enjoyed playing Bunco at Our Lady of Grace Church, where she was a communicant for over 50 years. She enjoyed bowling with the Burnt Hills Seniors, going on outings with the Nifty Fifty's of Our Lady of Grace Church, working on church fairs with the Women's Guild, and exercising with the ladies at church. After Bob passed, Dorothy would gather a group of women for monthly lunch outings which she was pleased to organize. Dorothy was an avid reader, Red Sox and Siena Basketball fan. She developed a special hobby of making "ice skate" ornaments. Having made hundreds of them over the years for any and all family, friends and anyone who touched her life, she loved hearing how they were a cherished addition to so many family and friends' Christmas trees. Dorothy loved working at her son Tom's company, Huersch Marketing Group, making many wonderful friendships and keeping everyone in line. She enjoyed her time and the friends she made while living at Coburg Village this past year. Dorothy was the beloved wife of the late Robert W. Huerter, with whom she enjoyed more than 57 years of marriage before his passing in 2012. She was also predeceased by her first-born infant son, Robert W. Huerter Jr., who passed in 1956. Those left to cherish her memory are her five loving children, Janis (Ken) Hogue of Wellfleet, Mass., William (Karen) Huerter of Halfmoon, James (Angelique) Huerter of Slingerlands, Karen (William) Meirs of Essex Junction, Vt., and Thomas (Erin) Huerter of Clifton Park; grandchildren, Michael (Kara), John (Chris), Jamie (David), Alison, Thomas, Kevin, Meghan, Jillian, Lily, Mason and Nathaniel; great-grandchildren, Jackson, Patrick, Reese, Addy, William and Ava; her sister, Elizabeth Desilets of Granby, Mass., and many nieces and nephews. As one good friend put it, Dorothy was such a presence in so many lives, she will be missed by many. Her children will always feel her incredible love, appreciate her resiliency, and admire her unwavering support of her family. The Huerter family wishes to extend their heartfelt thanks to Dorothy's long-time physician, Dr. Dean Limeri, and cardiologist, Dr. Charles Craig Peterson. Friends are invited and may visit with Dorothy's family on Sunday, April 3, from 4 until 7 p.m. at Our Lady of Grace Church, 73 Midline Rd., Ballston Lake. Her funeral Mass will be celebrated on Monday, April 4, at 10:30 a.m. in Our Lady of Grace Church. The Rite of Committal and interment will follow in St. Anthony's Cemetery, Glenville.

The family of Dorothy M. Huerter created this Life Tributes page to make it easy to share your memories.

Send flowers to the Huerter family.