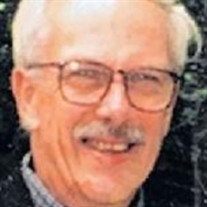 Douglas H. Hoyt, 89, died Saturday, March 5, 2022, at Ellis Hospital. Douglas was born in Rochester, N.Y., to the late Albert and Florence Tanney Hoyt. He graduated from Siena College in 1956, receiving a bachelor's degree in English with a minor in education. Douglas served in the U.S. Army from 1956 to 1958. He went on to receive a PhD in Medieval English Literature from the University of St. Louis in 1961. He began his teaching career at Colonie Central, and taught there from 1958 to 1961. He taught at Siena College from 1966 until 1973, and at the University of Missouri at St. Louis from 1964 to 1966. After his teaching career he worked for the NYS Department of Education as an education assessment specialist, retiring in 1998. Douglas was a communicant of St. John the Evangelist Church in Schenectady and a member of their choir. He volunteered for Concerned for the Hungry and was a former board member. He enjoyed playing golf and played in the NYS Education Golf League. Douglas was predeceased by two brothers, Albert E. Hoyt and Donald C. Hoyt. He is survived by three children, Terence J. Hoyt of Guilderland, Eileen L. (Joseph) Carbone of Mechanicville and Mary Kate (Andrew) Bertone of Wayne, N.J.; five grandchildren and six great-grandchildren. Relatives and friends are invited to attend his Mass of Christian Burial, which will be celebrated, Friday, March 11, 2022, at 11 a.m. at St. John the Evangelist Church, Union Street, Schenectady. Calling hours will be Thursday from 5 until 7 p.m. at the Gleason Funeral Home. Burial will be in St. Agnes Cemetery, Menands. Memorial contributions may be made to St. Jude Children's Research Hospital, 501 St. Jude Pl., Memphis, TN 38105 or to St. Joseph's Indian School, PO Box 326, Chamberlain, SD 57326

Douglas H. Hoyt, 89, died Saturday, March 5, 2022, at Ellis Hospital. Douglas was born in Rochester, N.Y., to the late Albert and Florence Tanney Hoyt. He graduated from Siena College in 1956, receiving a bachelor's degree in English with a... View Obituary & Service Information

The family of Douglas H. Hoyt created this Life Tributes page to make it easy to share your memories.

Send flowers to the Hoyt family.