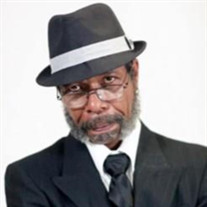 Duane F. Etienne, 66 of Schenectady, NY passed away on November, 10, 2021 after a long illness. Born on September 22, 1955 in Schenectady, New York, he was the son of Ulysse and Mary A. Etienne. Duane received his early education in the public schools of Schenectady, New York and graduated from Linton High School in 1973. He was an altar boy in the catholic church during his early years… he developed a love of music and was known for playing the trumpet among other instruments. He was active in several local bands and eventually traveled with a band playing music in Canada for a period of time. Upon his return, he decided to join the United States Coast Guard (USCG) and became an Electronics Technician. In their teenaged years he met Sheila Etienne and they married several years later. During his career with the USCG, they traveled to, Alaska, Hawaii, South America, Africa and Washington, D.C…. eventually discharging from the military and moving back to the Schenectady area. He began working for St. Clare’s Hospital as a Pharmacy Technician for over 10 years. He held various other positions until his retirement. Throughout his entire life, his love of music and entertainment stayed with him - he continued performing with local bands as a bass guitarist. He is featured on two albums with the Ill Funk Ensemble and videos can be found on YouTube. Duane was preceded in death by his parents, Ulysse and Mary A. Etienne and he leaves to cherish his memory, Sheila Etienne and their two children, Nohelani (Kwabena) Etienne and Duane (Jovonna) Etienne Jr., in addition to eight grand-children: Kwesi Etienne, Sanaa Etienne, Nailah Etienne, Nia Etienne, Jada Etienne, Kandahse Etienne, Leanna Etienne and Kyrie Etienne. Duane had one sister whom he loved greatly; Germaine Etienne of Massachusetts, as well as his companion, Ms. Joyce McCauley, of Schenectady, in addition to a host of aunts/uncles, nieces/nephews, cousins and friends. Due to Covid-19 we are following the DOH Guidelines and having services for the family held at New Comer Cremations & Funerals, on November 29, 2021 at 12:00 however it will be livestreamed for all to watch. Burial will be private, immediately following the memorial service at Most Holy Redeemer Cemetery.

Duane F. Etienne, 66 of Schenectady, NY passed away on November, 10, 2021 after a long illness. Born on September 22, 1955 in Schenectady, New York, he was the son of Ulysse and Mary A. Etienne. Duane received his early education in the public... View Obituary & Service Information

The family of Duane F. Etienne created this Life Tributes page to make it easy to share your memories.

Duane F. Etienne, 66 of Schenectady, NY passed away on November,...

Send flowers to the Etienne family.