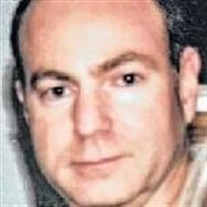 Edward J. Hyland Jr., 59, passed away peacefully, surrounded by his loving family, Wednesday, November 17, 2021, after a six year courageous battle with cancer. Ed was the son of Ruth Hyland and the late Edward J. Hyland, Sr. Ed was a senior mechanical engineer for the U.S. Army at Benet Laboratories, part of Army Futures Command. As stated by his colleagues, "The U.S. Army has lost a superior engineering artisan, problem solver, educator, armament historian, colleague and friend." In his 36 years of Army Civilian Service, Ed has influenced close to every large caliber armament product and technology developed and fielded to the war fighter. He authored, coauthored, or was referenced in 97 technical reports or papers produced at Benet. He is also listed as an inventor on four patents for advancement in large caliber cannon technology. Despite his battle with his illness, his passion for his work never waned. Ed's other passions in life included superior cooking, (we always looked forward to his Christmas Eve dinners) gardening, fitness, watching his Jets, Mets and Rangers, and of course, spending time with his family. Ed was not only incredibly generous, but also someone you could always turn to for answers, guidance or support. Along with his mother, Ed is survived by his siblings, Debbie (Anthony) Oppelt, Denise (Dale) Holmes and Justine (Kevin) Cuttler. He is also survived by his nieces and nephews, Ryan Oppelt, Tyler Oppelt, Cory Ragone, Shannon Ragone, Tori MacGilfrey, Conner Walthers, Brian Cuttler, Hannah Cuttler; and his great-niece and nephews, Aiden, Ben, Caelyn and Stetson Oppelt. Calling hours will be held on Tuesday, November 23, from 4-7 p.m. at New Comer Cremations & Funerals located at 181 Troy-Schenectady Road Watervliet. A funeral service will be held on Wednesday, November 24, at the funeral home at 9 a.m. Interment will follow the service in Most Holy Redeemer Cemetery, Niskayuna.

The family of Edward J. Hyland Jr. created this Life Tributes page to make it easy to share your memories.

Send flowers to the Hyland family.