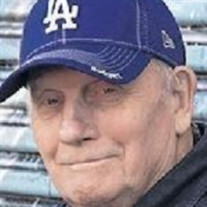 Dear God, how's it going. I know you are super busy with "everything," but I wanted to give you a heads up on your new arrival Edward Shatraw. Edward, or Eddie to pretty much everyone who knew him, peacefully "called it a day" on August 20, 2021, at the age of 91. He spent his last couple of years down here at the Eddy Retirement Community in Troy. He liked the fact they named the place after him. I wanted to let your concierge know what is heading upstairs. First: Don't be late at the gate. Eddie's "inside voice" was turned off his last couple of decades so he called it as he saw it to everyone... everywhere. He was a true "get your hands dirty," blue-collar, DIY Albany Lifer. He put his work boots on for G.E. in Schenectady for 37 years 'till retirement in 1988, fixing the turbine engines but don't let him hang anything using his patented "Eddie Eyeball" technique. He won't want anyone to make a big deal about his service of 20 years as a sergeant first class in the Albany 210 Association National Guard. He was quietly proud of it and so are we. Please inform Room Service they are going to need an unlimited supply of salmon, poached eggs, English muffins, fig newtons, fish fry (Fridays only) ginger ale, Pepsi, and most importantly Drambuie. If they still make Creme De Menthe, the green kind, keep that handy for his ice cream. It's a mystery to us too. Your Community room will need a pool table, a bowling lane, a dart board, a shuffleboard court and a table for nickel and dime poker. If possible, start up a pinochle league before he gets there so he won't bother everyone asking if they play. You are going to need a dance floor and a big band orchestra but please don't let him near an open microphone. Eddie loved telling off-colored jokes and told them 24/7 again... to anyone... anywhere. How's the weather in heaven because if it's nice 365 days a year he's going to want to have weekend camping and cookouts, clam bakes and play golf. Is he allowed to swear on Sunday during N.Y. Giant football games because he will. He was predeceased by his loving wife of 42 years, Joyce; his brother, William Shatraw (Peggy); in-laws, Tom and Mary Casey; and his mother, Margaret. I'm sure you know her. She's the fireball walking around telling people there's a hole in her scotch glass. They are going to be very happy to be reunited. For the rest of us down here, his sisters, Pauline Russo (predeceased Sal) and Kathleen Carras (Vince); children, Paul, Lisa, David and Mark; grandkids, Scott (Diane), Melissa, Casey, Mackenzie and Elizabeth; in-laws, Marcia Hogan (Joe), and so many cousins, nieces and nephews, we just wanted to say how much we loved him and will miss him. Take care of him for us. Give me the gift of laughter, oh I pray though tears should hover near. The family wishes to thank the staff at Eddy Terrace and Eddy Heritage Nursing Home for their care and compassion. Relatives and friends are invited to visit with his family on Tuesday, August 24, from 10-11:30 a.m. in the Daniel Keenan Funeral Home, Inc., 490 Delaware Ave., Albany. His funeral Mass will be celebrated at 12 p.m. in St. Francis of Assisi Church, 391 Delaware Ave., Albany. Masks and social distancing are required by all in attendance. Entombment will follow the Mass in the Mausoleum of St. Agnes Cemetery, Menands. In lieu of flowers, those who wish may send donations to Community Hospice, 445 New Karner Rd., Albany, NY, 12205.

Dear God, how's it going. I know you are super busy with "everything," but I wanted to give you a heads up on your new arrival Edward Shatraw. Edward, or Eddie to pretty much everyone who knew him, peacefully "called it a day" on August 20,... View Obituary & Service Information

The family of Edward J. Shatraw created this Life Tributes page to make it easy to share your memories.

Send flowers to the Shatraw family.