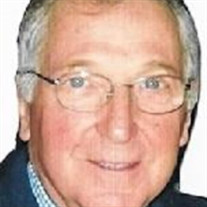 The Honorable Edwin James Tobin of Albany died on February 17, 2022. He is survived by his beloved wife of 59 years, Judge Beverly C. Tobin; his cherished children, Edwin J. Tobin Jr. (Lisa), Anna Tobin D'Ambrosio (Paul), and Julia Tobin Corrou (Stephen). He leaves behind six treasured grandchildren, Hope Tobin Faron (Conor), Edwin "Ted" J. Tobin III, Julia F. D'Ambrosio, Grace M. D'Ambrosio, Stephen J. Corrou Jr., and Michelle A. Corrou; dear brother, James Daly Tobin (Darlene); and dear sister-in-law, Mary F. Tobin. His brother, John M. Tobin Jr., and sister, Anne Tobin Ashe, predeceased him. Judge Tobin was born in Albany, the son of the late John M. Tobin Sr. and Anna Scheibly Tobin of Rensselaer. He was educated at St. John's Academy in Rensselaer, Siena College, and Albany Law School (class of 1962), where he was associate editor of the Albany Law Review and from which he graduated with honors. Judge Tobin was admitted to the New York State Bar in 1962, and to the United States Supreme Court in 1965. Judge Tobin was twice elected justice to the City Court of Albany and served from 1976 to 1983. He also practiced law in Albany for 58 years as a partner in Pentak, Brown, and Tobin and later Herzog Law Firm. His memberships in professional organizations included the Albany County Bar Association, the New York State Bar Association, and the New York State Trial Lawyers Association. Edwin served as a trustee of Historic Cherry Hill and was a volunteer in the Catholic Prison Ministry for over a decade. He and his good pal "Jack" enjoyed helping with the pet therapy program at Albany Medical Center. He was a member of the Ancient Order of Hibernians and Knights of Columbus. He was a parishioner at Historic St. Mary's Church in Albany. An adventuresome world traveler, Edwin viewed Lake George as one of the most beautiful spots on earth. He treasured his time there with his family, to whom he was deeply devoted above all else. The family would like to thank the dedicated staff of The Community Hospice of Albany. Relatives and friends are invited to visit with Judge Tobin's family on Friday, February 25, from 4 to 6 p.m. at the McVeigh Funeral Home, 208 North Allen St., Albany. Please enter the funeral home from the rear parking lot entrance only. Unvaccinated individuals must wear a mask and practice social distancing. Funeral services are Saturday, February 26, at 9:30 a.m. in the Historic Church of St. Mary on Capitol Hill where his funeral Mass will be celebrated. Unvaccinated individuals must wear a mask. The Rite of Committal will be held in the Calvary Cemetery, Glenmont, immediately following the funeral Mass. In lieu of flowers, memorial donations in Edwin's name may be sent to Nanyuki Catholic Parish, P.O. Box 86, Nanyuki, Kenya, or the Community Hospice of Albany, or the Roman Catholic Diocese of Albany.

The family of Hon. Edwin J. Tobin created this Life Tributes page to make it easy to share your memories.

The Honorable Edwin James Tobin of Albany died on February 17,...

Send flowers to the Tobin family.