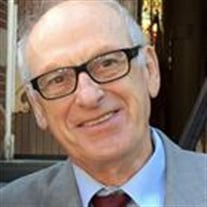 Eugeniusz Synowiec (Gienek/Gene), 79, passed away peacefully with family at his side at Ellis Hospital on June 10th, 2022. He was born in Piechoty, Poland, to the late Jakub and Agnieszka Synowiec. From an early age, Gienek was determined to better his and his family life. Prior to immigrating to the USA, Gienek worked at WSK Mielec as a quality aircraft controller, then at Spoldzielnia Przyszlosc as a sales and marketing project lead. After immigrating to the USA in 1991, he settled in Colonie NY where he continued the second half of his life journey. He worked at Child’s Hospital, Albany, NY. After retiring he became a full time very active and happy gardener, landscaper, handyman and most of all Dziadziu (Grandpa). From grandkids’ early ages to their teenage years, he was present at their every birthday, school play, concert, award ceremony, graduation, swim meet, many volleyball and tennis matches, and of course soccer games, cheering, motivating and pushing gently to be better at everything they chose to do. Soccer was his passion. Gienek played soccer himself for many of his teenage years, then he re-lived it through grandkids. The World Cup was a month of ‘nothing else than soccer exists time’. He was a very proud Dziadziu of all his five grandchildren.. proud of their already intellectual accomplishments and their love of always staying active. Gienek’s other interests playing accordion, chess, cards, dancing, staying up to date on world’s current events and solving sudoku puzzles. Gienek is survived by his loving wife of 54 years, Maria Synowiec, daughter Agnieszka Teresa (Guy) Barletta, son Andrzej Robert (Malgorzata) Synowiec and his pride-and-joy grandchildren, Kasia, Alex and Max Barletta, and Victor and Kuba Synowiec. In addition to his parents, Gienek was predeceased by his brothers: Josef and Wladyslaw and sisters: Maria, Genowefa and Anna. A calling hour will be held on Thursday, June 16th from 9am – 10am at New Comer Funeral Home, with a Mass of Catholic Burial immediately following at 11am at St Adalbert Catholic Church, 550 Lansing St. Schenectady, NY. Interment will follow at St. Anthony’s Cemetery, 27 Glenridge Rd., Glenville, NY 12302.

Eugeniusz Synowiec (Gienek/Gene), 79, passed away peacefully with family at his side at Ellis Hospital on June 10th, 2022. He was born in Piechoty, Poland, to the late Jakub and Agnieszka Synowiec. From an early age, Gienek was determined to... View Obituary & Service Information

The family of Eugeniusz Synowiec created this Life Tributes page to make it easy to share your memories.

Send flowers to the Synowiec family.