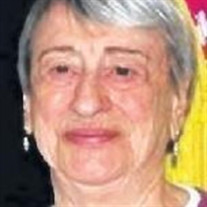 Evelyn A. Roberts (Donovan) Lebretore, 92 of Cohoes, passed away at Samaritan Hospital in Troy, with her family by her side on Thursday, September 16, 2021. She was born in Cohoes and was the daughter of the late Louis and Amelia Denekar Roberts. She graduated from Cohoes High School, class of 1946. After graduation she worked for the New York Telephone Company and later as a housewife choosing to raise her family. She worked for the Albany County Board of Elections in Albany for 20 years. She was a charter member and lifelong member of the Cohoes Columbiettes Council #192, a member of the Colonie Elks Lodge 2192, Red Hats, Latham Women's Club, St. Bernard's Church, SPA and Rosary Society, Ladies of St. Anne at St. Mary the Assumption Church, Waterford, Get Smart Club. She was an avid bowler with the Powder Puffers, she played Bocci ball at the Waterford Knights of Columbus League. Every Monday she played cards with her girlfriends, she worked monthly Bingo at the Cohoes Knights of Columbus and their monthly breakfasts. She went on the bishop's trip to Rome where she saw the Pope. She liked going to the Racino, she lived life to the fullest. She was the wife of the late Joseph C. Lebretore. She is survived by her children, Marianne (Late Don) Gula of Cohoes, William (Pamela) Donovan of Cohoes, Patricia Donovan of Halfmoon, John Donovan of Deland, Fla., Kathleen Donovan of Cohoes, Patricia (late Glen) Adams of Delaware, Virginia Battige of Watervliet, Thomas (late Cindy) Lebretore of Florida, and the late Richard E. Donovan and Joseph C. Lebretore Jr. She was the sister of the late Mary Bonesteel and Louis Roberts Jr. She is also survived by 14 grandchildren, 14 great-grandchildren and several nieces and nephews. A Mass of Christian Burial will be celebrated on Wednesday, September 22, at 10:30 a.m. in the Church of the Holy Trinity, Cohoes. Interment will follow in St. Joseph's Cemetery, Waterford. Relatives and friends may call at the Dufresne Funeral Home, Inc., 216 Columbia St., Cohoes on Tuesday, from 4 to 7 p.m.

Evelyn A. Roberts (Donovan) Lebretore, 92 of Cohoes, passed away at Samaritan Hospital in Troy, with her family by her side on Thursday, September 16, 2021. She was born in Cohoes and was the daughter of the late Louis and Amelia Denekar Roberts.... View Obituary & Service Information

The family of Evelyn A. Lebretore created this Life Tributes page to make it easy to share your memories.

Evelyn A. Roberts (Donovan) Lebretore, 92 of Cohoes, passed away...

Send flowers to the Lebretore family.