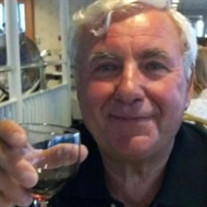 Franco “Frank” Ruzza, 77 of Clifton Park passed away Saturday, June 11, 2022, at Albany Medical Center after a brief illness, surrounded by his loving family. Born on August 19, 1944, and raised in Isola Del Liri, Italy, he was the son of the late Vittorio and Domenica (Lorini) Ruzza. Frank moved to France in 1964 to begin working, before moving to America in 1967. It was that exact day that he met the love of his life, Anna Maria DeThomasis. They married in 1970 and welcomed their first daughter, Paola, in 1973 and their second daughter, Sabrina in 1978 Frank was a determined worker, becoming a skilled mason. He proudly completed building his family home in 1986. Frank could always be counted on to take on projects for family and friends. He worked as a mason for the New York State Thruway Department and retired after 25 years of dedication in 2006. Frank also was an avid and dedicated soccer fan. He never missed a chance to watch his beloved Italian National team and Juventus Football Club. Frank had many traditions, he loved holiday cookouts, a Lake George boat tour, and each year, he made his wine. Though the memories that he held closest to his heart were the ones that he spent with his family, whom he loved so very much. When Frank became a grandfather (Nonno) his whole world changed. His love for his four grandkids was so strong and they loved him right back. In addition to his parents, Frank is predeceased by his sister, Maria DiPoce. Survivors include his beloved wife of 52 years, Anna Maria Ruzza; daughters, Paola (Ronald) Cummings and Sabrina (Cory) Houser; grandchildren, Adrian Cummings, Luca Cummings, Anna Houser, and Cole Houser; siblings, Margherita (Gullio) DiPoce, Gennaro (Rosalba) Ruzza and Roberto (Michelle) Ruzza, Frank is also survived by a host of nieces, nephews, cousins, brothers-in-law, and sisters-in-law. A visitation will be held on Friday, June 17, 2022, from 4:00 p.m. to 7:00 p.m., at the Glenville Funeral Home, 9 Glenridge Road, Glenville. A Mass of Christian Burial will be celebrated on Saturday, June 18, 2022, at 9:00 a.m. at St. Edward the Confessor Church, 569 Clifton Park Center Road, Clifton Park, New York 12065. Entombment will immediately follow in Most Holy Redeemer, Niskayuna

The family of Franco Ruzza created this Life Tributes page to make it easy to share your memories.

Send flowers to the Ruzza family.