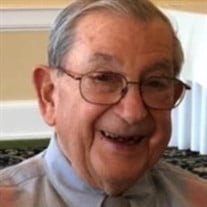 Frank J. Carlino passed away into the arms of Our Blessed Lord on Wednesday afternoon, December 15, with his dear family and countless friends loving him to the very end of his earthly sojourn.He was born in Troy, New York on May 7, 1925 to Anthony and Marie (Palladino) Carlino. On May 9, 1948, he married Catherine Piazza at St. Paul’s Church also in Troy. They joyfully welcomed the birth of two sons. Catherine died on March 8, 2010 and Frank's devotion to her never waned.Frank and Catherine were 2 peas in a pod. Their sole purposes in life were to believe in God, faithfully practice their Catholic faith, love their family members, and did what they could to be of service to others. They loved to travel together, being blessed with numerous opportunities to voyage to Florida, Texas, Hawaii, Italy, and Ireland.Frank was a proud veteran of the United States Army, nobly serving his country in the European Theater of World War II from 1943-46.Frank was a trained accountant. He labored endlessly his whole life for the church and his family, earlier in his marriage working for a few years at 3 jobs to support, Catherine, Frankie, and Richie. He was employed at the state Department of Labor in Albany for 37 years, serving as supervisor of the cashier unit for more than 2 decades. For 42 years he volunteered as Business Manager for St. Michael the Archangel Church in Troy, his family’s home parish, retiring again at the “young” age of 89.For the last 4 years he resided at Holiday at the Atrium in Glenville, where he lived ever so happily with Fr. John Facci and many other residents. He enjoyed so many friendships there, and his son Frankie and all the family were so comforted that his son Richie lived only a mile away.His only major complaint over the last few years could be considered by some rather odd for someone who was 96 and ½ years old: “My day goes by too fast!” But those who knew him as a dedicated, skilled, and indefatigable worker were not at all ever surprised to hear his complaint. They knew all too well that the comment fit him to the T.He is predeceased by his sister and brother-in-law Josephine and Sal Curto and his daughter-in-law Phyllis (Smith) Carlino.Frank is survived by his son Frankie (Valorie), his son Fr. Richard Carlino, Pastor, St. John the Evangelist and St. Anthony’s Churches, Schenectady Fire Chaplain, and Ellis Hospital Pastoral Visitor; his grandson Brian (Amie), grandson Kevin (Ed), and great granddaughters Ava and Ella, as well as many nieces and nephews.Frank's Funeral will be celebrated this Sunday, December 19, at a 4 PM Mass at St. John the Evangelist Church, 808 Union Street, Schenectady.The weekly 4 PM Mass at St. Anthony’s will be transferred to St. John’s. The Mass of the 4th Sunday of Advent will be celebrated, and by attending Frank’s funeral the Sunday Mass obligation will be fulfilled.Present in the Sanctuary will be +The Most Reverend Edward Scharfenberger, D.D., J.D., Bishop of Albany, as well as Priest Concelebrants in the front pews.Everyone in attendance will be asked to wear a face mask upon entrance into the church and throughout the entire Mass. There will be no Wake. Frank’s Burial will be on Monday, December 20, at St. Mary’s Cemetery in Troy. He will be interred next to his dear wife Catherine.In lieu of flowers donations to the City Mission of Schenectady, 425 Hamilton St., Schenectady, NY 12305 will be greatly appreciated.Arrangements are by the Gleason Funeral Home, Schenectady.

Frank J. Carlino passed away into the arms of Our Blessed Lord on Wednesday afternoon, December 15, with his dear family and countless friends loving him to the very end of his earthly sojourn.He was born in Troy, New York on May 7, 1925 to... View Obituary & Service Information

The family of Frank J. Carlino Sr. created this Life Tributes page to make it easy to share your memories.

Frank J. Carlino passed away into the arms of Our Blessed Lord...

Send flowers to the Carlino family.