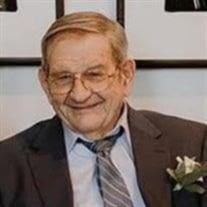 Gabriel J., age 86 of Ravena, N.Y. formerly of Alstead, N.H. and Brightwaters N.Y. peacefully went to be with the Lord on January 31, 2022. Survived by his wife of 61 years, JoAnn; three children Suzanne (Douglas), Joseph (Linda), and James (Anne); nine grandchildren Christine, Laura, Patricia, Gabriel, Jessica, Gregory, Jared, Anthony, and Jake; three great grandchildren Julia, Jenson, and Levi. He was predeceased by his sister Camille. Gabe was a loving uncle and friend of many. Gabe was born on August 27, 1935 in Brooklyn NY to Joseph and Susie Trotta. He graduated from RCA Institute and Adelphi University. As an Electrical Engineer, he worked for Bell Laboratories in NY where he contributed to the development of early transistors which were foundational for today’s digital revolution. He worked for Airborne Instruments Laboratory on radar technologies including those used on space missions. But Gabe enjoyed best working with his pals Al and Tony as an Engineering Inspector for the Town of Islip, N.Y. Gabe built his first home with his hands in Lindenhurst NY and his retirement compound on nine acres of pristine land in Alstead N.H. where he and his bride JoAnn enjoyed the serenity of nature, the peaceful warmth of friends, and the prayerful beauty and unity of St. Catherine’s Church. Always helping others, Gabe would fix anything for anyone from radios to TVs to blenders to hockey sticks to carving wooden gunstocks for all the neighborhood kid’s Daisy Rifles! And Gabe was still happily “in production” in his electronics laboratory at his untimely death. His greatest love though was JoAnn and la famiglia, watching the family grow and providing pearls of wisdom to everyone. Gabe was incredibly passionate about working hard, the love of God, and every aspect of the word respect including that of the unborn. His robust voice will be missed, but not forgotten. Visitation will be held at the W.C. Brady’s Sons, Inc. Funeral Home, 97 Mansion Street, Coxsackie N.Y. on Sunday February 6, 2022 from 12:00 Noon to 3:00P.M. Wearing of face masks will be required to be worn at all times while at the funeral home, regardless to vaccination status, and for those unvaccinated. Mass of Christian Burial will be celebrated at The Church of St. Patrick, Ravena, N.Y. on Monday, February 7, 2022 at 10:00 A.M. Contributions in Gabriel's memory may be made to St. Jude Children's Research Hospital, P.O. Box 1000, Dept. 142, Memphis, Tennessee, 38148-0142.

The family of Gabriel J. Trotta created this Life Tributes page to make it easy to share your memories.

Send flowers to the Trotta family.