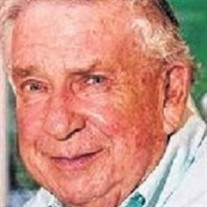 Gerald W. Connolly, 86 of East Greenbush, passed away peacefully on the morning of June 10, 2022, at his home with his wife and children at his bedside. He was born in Rockville, Conn. in 1935, the son of Rita Rose Symington. They moved to the Capital District in 1946, where Gerald met his beloved Ida in 1954. They have lived in the East Greenbush and Schodack area along with his two brothers, and all of their expanding families, ever since. Gerald attended Columbia High School where he excelled in track and loved playing the oboe with the band. Upon graduation in 1953, he got a job in the mailroom at the National Commercial Bank and Trust Company. He remained with the bank (Key Bank) for over 50 years where he made many wonderful friends and rose through hard work and continually pursuing his education, to the positions of comptroller and senior vice president. Going to school at night on the urging of Ida, Gerald first obtained his undergraduate degree in accounting from Russell Sage College and advanced towards his master's degree through courses at the University of Wisconsin and Russell Sage. He later taught accounting to night students at The College of Saint Rose. Gerald always found the time to give back to his community, coaching his kids and others in both youth baseball and softball, helping run the Muscular Dystrophy Telethon for many years, serving as treasurer at the Rensselaer Boys Club and volunteering with the Father Peter Young charities. He was particularly involved with his church, The Church of St. Mary at Clinton Heights, where he served as an usher as well as volunteer and treasurer of the Bazaar and Bingo and member of the Parish Council. He was an active member and Board Officer of the Albany Jaycees and a proud member of the Albany Sons of St. Patrick. Gerald was a member of the U.S. Army National Guard from 1953 to 1962, where, among other duties, he regularly drove the "Deuce and a Half" truck. Despite a difficult childhood, Gerald was known by all for his great positivity and joy in interacting with others. He shared these traits with his beloved single mother "Ma" and his brothers, all of whom could invariably make him laugh hard from the moment he saw them until the moment they left. He particularly loved his time with his brother and sister-in-law, Richard and Theresa Swahlan (Ida's identical twin), with whom they shared double dates, a wedding, the Hampton Manor neighborhood, extensive travel and countless good times. Gerald was immensely proud of the accomplishments of his family, many, if not all, of which were the direct result of the amazing foundation established through his and Ida's sacrifice and unyielding support. He was always happy to recount the many undergraduate and advanced degrees of all four of his children and of his grandchildren. He made the career paths and successes of his children and grandchildren the focal point of our Friday family lunch conversations. He was also the world's greatest fan, attending, with Ida, without fail, hundreds of school, theater, concert and athletic events and always coming to the considered conclusion that his child/grandchild had been the most talented participant. Gerald was a lifelong Red Sox and New York Giants football fan, passions that he shared with his children. A Giants season ticket holder through his brother Gary "Butch," he was ecstatic for their first Super Bowl win in 1986, and joyfully attended their victory in Super Bowl XLVI in Indianapolis with Ida, Steven and Mike Jr. Gerald was ahead of his time as an always involved dad. He spent countless hours playing with his kids all through the 1960s and 1970s, serving as "automatic pitcher" and "automatic quarterback" for both teams in neighborhood sandlot games, often while holding his demanding infant daughter. He and the family loved their annual trips to Belvedere Lake, where they spent quality time with each other and other Key Bank friends and family. He also looked forward to family dinners, including drawn out Saturday nights at Rose's Restaurant, where he happily consumed 50 years worth of lasagna. Gerald loved to sing to his family, complaints notwithstanding. He would loudly sing selections from various Broadway musicals, making up any forgotten lines. An avid Dr. Seuss reader to his kids and grandkids, he read "Yertle the Turtle" so many times that he did not need to read the lines to narrate the book. He invented stories about a helpful ghost called "Don Quixote" and the imaginary "Fred Nitney" to the delight of his young listeners. Gerald also enjoyed and was particularly proud of his world travel with Ida. He would marvel at the fact that "two little kids from East Greenbush" visited (a non-exclusive list) the Pyramids, the Holy Land, Russia, all of Europe, the Great Wall, Alaska, Hawaii, Australia, Japan, Vietnam, Korea, Argentina and Brazil. They also drove across the continental United States. He is survived by his beloved family: his wife of 64 years, Ida (Danner) Connolly; his children, Michael (JoAnne Fabian), Gerald Jr. (Patricia Casey), Karen Mack (Robert) and Steven (Colette Fontaine); his nine grandchildren, Michael Jr. (Junko), Matthew (Alexandria), Mitchell, Casey Anne (Ty), Christopher, Sean, Kierlyn Mack and Ryan Mack, and Eva: and his great-granddaughter, Aurora. He is also survived by his brothers, Gary Connolly (Carolyn) and Al Symington, and many beloved in-laws, nieces and nephews. Gerald will be remembered by all for his constant smile, kindness and optimism. These sentiments have been confirmed by the numerous messages received from his many friends and family. We were all blessed to have him. He'll be terribly missed. Relatives and friends are invited to attend his funeral Mass on Tuesday at 10 a.m. in the Church of St. Mary at Clinton Heights, 163 Columbia Tpke., Rensselaer. Interment will be in the Holy Sepulchre Cemetery, East Greenbush. Visitation will be from 4 - 7 p.m. on Monday at the Wm. J. Rockefeller Funeral Home Inc., 165 Columbia Tpke., Rensselaer. Contributions may be made in Gerald's name to a charity of one's choice.

Gerald W. Connolly, 86 of East Greenbush, passed away peacefully on the morning of June 10, 2022, at his home with his wife and children at his bedside. He was born in Rockville, Conn. in 1935, the son of Rita Rose Symington. They moved to the... View Obituary & Service Information

The family of Gerald W. Connolly created this Life Tributes page to make it easy to share your memories.

Send flowers to the Connolly family.