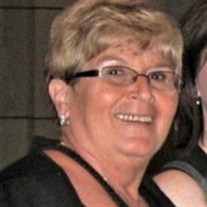 Geraldine "Gerri" Ann Sprys was born April 18th, 1944 in Albany, New York to Angeline Angerame and Gerolomo Gutta. She was the youngest of four sisters: Marie, Carmella and Johanna. She graduated from nursing school at the age of 20 as an RN and enlisted in the Army. Geraldine helped deliver countless babies as a labor and delivery nurse and served as nurse manager for Walter Reed Army Medical Center. She served as the head nurse for the newborn nursery at Tripler Army Medical Center. She met the love of her life, James Sprys, and was married in 1980. Geraldine had three sons: John Robert, and twins, James Christopher and Michael Jerome. She was honorably discharged, proudly, as Major from the Army after giving birth to her twin boys. She continued to work as a Civilian nurse in Bay City, TX. for Matagorda General Hospital and nursing home. She always assumed the position of nurse manager or head nurse wherever she went. Gerri was known for being a tough leader by her fellow nurses and a compassionate caregiver for her patients until she retired after 40 years of service. Gerri once said that her goal in life was to see her three sons happily married and to have grandchildren. She welcomed wives Jennifer (Rob), Carrie (James), and Eileen (Michael). She boasted that God gave her three daughters. Gerri was promoted to the official rank and title of "Nana" in 2003 at the birth of her oldest grandchild, Emily. She welcomed, loved, rocked, and sang "pat-a-cake" with Emily, James, Kathryn, Elizabeth, Jack, Eleanor, Margaret, Harriet and Michael. Her grandchildren won't forget the joy of a sleep over at Nana's, mornings filled with homemade Italian pizzelles, and what it meant to bake Christmas cookies with their Nana. Geraldine passed on from this life peacefully surround by her sons on January 28th, 2022 in Lamesa Medical Arts Hospital. She was preceded in death by her husband, James, her parents, and her sister, Marie Franke. She is survived and greatly missed by her sons, their wives, and her nine grandchildren. The family wishes to thank the wonderful care given to Gerri by the providers, nurses and staff of Lamesa Medical Arts Hospital. In lieu of flowers, Gerri would ask that you call your grandparents every Sunday and hug our mothers. A Memorial Mass will be held in Lubbock, TX. on Saturday, February 5th , 2022 at Christ the King Church at 11:00 a.m., with a reception to follow. Funeral arrangements are under the care and direction of Gonzales Funeral Home of Lamesa. TX.

Geraldine "Gerri" Ann Sprys was born April 18th, 1944 in Albany, New York to Angeline Angerame and Gerolomo Gutta. She was the youngest of four sisters: Marie, Carmella and Johanna. She graduated from nursing school at the age of 20 as an RN... View Obituary & Service Information

The family of Geraldine G. Sprys created this Life Tributes page to make it easy to share your memories.

Send flowers to the Sprys family.