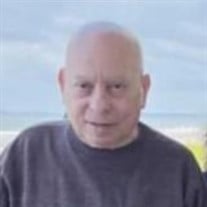 Hector de la Concha (Staff Sergeant DLC, Mr. D) 18 November 1947 - 5 March 2022 It is with tremendous sadness and a very heavy heart that we announce the untimely death of Mr. Hector de la Concha of Schenectady, New York. He passed away peacefully on March 5th, 2022 in the comfort of his home, in the arms of his wife, with his loving family after a long battle with early onset Alzheimer’s Disease. He was born in Ponce Puerto Rico on November 18, 1947 to Carlos and Luz Myrta de la Concha and he shared his parent’s love with five brothers; Carlos, Robert, Harry, Irving and Richard whom he dearly loved. Hector graduated from Dewitt Clinton High School in the Bronx, New York in 1965. He was a fearless patriot who selflessly volunteered to serve in the U.S. Army during the Vietnam Conflict. On July 25, 1966 Hector married his childhood sweetheart and the love of his life, Martha Olmo. Together they were an amazing team that poured their love upon their children and always sacrificed anything if it would benefit their babies. In 1978 Hector earned a Master Of Science In Education from the State University Of New York at New Paltz. This was one of the accomplishments he was most proud of because of the sacrifices that he and Martha made to make it possible. As a natural born educator and an extremely hard worker he quickly rose through the ranks of the New York State Department of Corrections where he retired after 39 years of service as the Director of the Division of Hispanic and Cultural Affairs. Hector was a man of many talents and interests. He was an entrepreneur who owned and operated 4 family businesses, a published author, a poet, a crafter, an artist, a music lover and an avid community volunteer. Most importantly, he was an amazing husband, father and grandfather who believed in “family first and family forever”. Hector was an insightful and lighthearted individual who enjoyed a life full of family, many friends and lots of laughter. His charismatic personality often drew people to him for advice and comfort. Making people laugh came easy for him and when he entered a room laughter was sure to ensue changing the atmosphere and putting everyone at ease. Hector was preceded in death by his mother Luz Myrta de la Concha, son in law Andrew Kennedy and grandson Andrew Kennedy Jr.. He is survived by his loving wife of 55 years, Martha Olmo de la Concha, his father, Carlos de la Concha, 4 children; Michele de la Concha Santiago (Adalberto Santiago), Melissa de la Concha, Hector de la Concha Jr., Marc de la Concha, 5 grandchildren; Elicea de la Concha, Isabella Kennedy, Gregory Kretzler, Madeline de la Concha, Jack Kennedy, and many beloved family members and friends. The de la Concha family wishes to thank the countless family members and friends that comforted Hector during his long difficult battle as well as the the incredible Hospice Care Team for their extraordinary care, kindness, compassion and expertise (especially, Nurse Jenny, Nurse Michele and Ms. Martha). Visitation will be held at Demarco-Stone Funeral Home at 1605 Heldeberg Avenue in Rotterdam New York on Saturday March 12, 2022 from 12 noon to 2 pm. Funeral services, with military honors will begin at the funeral home at 2:00 pm.

The family of Hector de la Concha created this Life Tributes page to make it easy to share your memories.