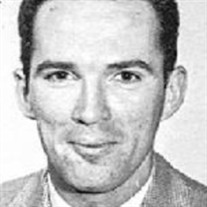 James J. Duncan, age 92, passed away on October 4, 2021, at his residence surrounded by his family. He was born in Albany, the son of the late David and Loretta Duncan. He was predeceased by his daughter, Maureen; sisters, Anna and Margaret; and his brothers, David and Bernard. James attended St. John's High School in Rensselaer and then enlisted in the Army, where he served during the Korean War. He received numerous medals and commendations, including two Purple Hearts with Oak Leaf Clusters and a Bronze Star. Upon being honorably discharged, he continued his education at Albany Business College. After graduating, he was employed by the U.S. Postal Service. He also worked for the City of Albany Fire Department as a payroll clerk for many years. There, he received The Mayor's award for exceptional service and the Distinguished Service award in recognition of thirty years of service. In 1956, he met the love of his life, Matilda Tarzia, and they were married two years later on September 14, 1958. They had five children: Anna, Brian, Christina, Maureen and Sean. He enjoyed spending time with family and attending his children's and grandchildren's school activities and sporting events. He loved vacationing at Tupper Lake, Hampton Beach and camping in the Adirondacks. In later years, he liked to travel to Atlantic City and Las Vegas and took many trips to the casinos. During the summer months he liked to attend the Saratoga Racetrack. James was a diehard Yankees fan and went on bus trips to attend baseball games. He was a member of the American Legion for over 60 years, the VFW for 40 years and the Colonie Elks Lodge. James is survived by his wife of 63 years, Matilda; his children, Anna (Charles) Hale, Brian (Kathie) Duncan, Christina Duncan, and Sean (Kitty) Duncan; grandchildren, Christopher, Andrew, Philip, Ryan and Kacey; and two brothers, Harry (Carol) and Edward. He is also survived by nieces, nephews and sisters-in-law, Mary Duncan and Terry Rinaldi. Relatives and friends are invited to attend his calling hours on Monday, October 11, from 4 to 7 p.m. at New Comer Cremations & Funerals, 343 New Karner Road, Colonie. All are invited to attend his funeral Mass on Tuesday, October 12, at 11 a.m. in Christ the King Church, 20 Sumter Ave., Albany. Interment will be in St. Agnes Cemetery, Menands. In lieu of flowers, contributions in James' memory may be made to the Northeastern Association of the Blind at Albany (NABA), The American Legion, or Floyd Warriors.

James J. Duncan, age 92, passed away on October 4, 2021, at his residence surrounded by his family. He was born in Albany, the son of the late David and Loretta Duncan. He was predeceased by his daughter, Maureen; sisters, Anna and Margaret;... View Obituary & Service Information

The family of James J. Duncan created this Life Tributes page to make it easy to share your memories.

Send flowers to the Duncan family.