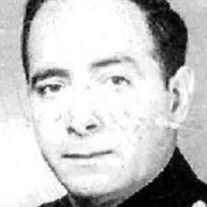 James M. Mantello, 90, passed away suddenly at Albany Medical Center on May 28, 2022. A lifelong resident of Troy, he was the son of the late Chester Mantello and Frances Geracitano Mantello; and beloved husband of Donna Mae Bouchard Mantello of Troy, they were married 51 years. James served in the U.S. Army Reserves. He started his career as a Troy Police officer, retiring in 1996 as a Troy Police detective. James enjoyed watching horse racing, going to OTB, fishing and summers in Ocean City, Maryland. He was a fan of the New York Yankees. He was a member of the Troy PBA and a communicant of Our Lady of Victory Church. Survivors, in addition to his wife Donna, include his children, Roberto Mantello, Carmella Mantello (Paul Laviano), and Michael Mantello (Dawn), all of Troy, Gary Broyles (Janae) of Kansas City, Mo., and Sylvio Mantello (Kristen) of St. Augustine, Fla.; special niece, Melinda Mantello (Robert Ezekiel) of Waterford; nine grandchildren, Pauly, James, Donata, Aaron, Johnny, Nicholas, Alana, Meghan and Payton; his brother, Anthony Mantello (Antoinette) and several nieces and nephews, and many extended family members. He also looked forward to his daily texts from Texas. In addition to his parents, he was predeceased by his brothers, Dominic, Nicholas, Joseph and Salvatore Mantello; and three sisters, Theresa Ciccarelli, Mary Elden and Anna Rose Mantello. Calling hours will be held on Friday, June 3, from 10:30 a.m. to 1 p.m. at the McLoughlin & Mason Funeral Home, corner of 109th Street and Third Avenue, Lansingburgh. A funeral Mass will follow on Friday at 1:30 p.m. in Our Lady of Victory Church, 55 North Lake Ave., Troy. Burial will be in St. Mary's Cemetery, Troy. Memorial donations in memory of James may be made to the Lansingburgh Boys and Girl Club, 501 4th Ave., Troy, NY, 12182 or online at lansingburghboysandgirlsclub.com.

James M. Mantello, 90, passed away suddenly at Albany Medical Center on May 28, 2022. A lifelong resident of Troy, he was the son of the late Chester Mantello and Frances Geracitano Mantello; and beloved husband of Donna Mae Bouchard Mantello... View Obituary & Service Information

The family of James M. Mantello created this Life Tributes page to make it easy to share your memories.

Send flowers to the Mantello family.