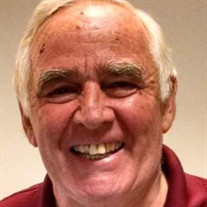 Not sure what to send?

James H. Meaney, 85, of Gansevoort, NY, formerly of Schenectady, NY, and Saratoga Springs, died Thursday, March 17, 2022. Jim was born on August 27, 1936 in Schenectady, the son of E. Raymond Meaney, Sr. and Elizabeth "Bess" Hayden Meaney and was a graduate of Nott Terrace High School and Siena College. On July 1, 1961, Jim married the love of his life, Marcia Cavanaugh, and they began their lives together in Saratoga Springs, to raise their five children to be part of a wonderful community. Jim enjoyed three careers: First, as a history teacher with the Queensbury School District; next, as everyone's favorite bartender from friendly locals to famous stars; and finally, as a rural mail carrier for the Gansevoort Post Office. Jim was known for his love of baseball and trivia, which he shared with people on his long walks, with an aerobie around his neck and trekking poles in his hands. When he wasn't walking, he was reading newspapers, running around with his fourteen grandchildren, or hanging out with the Old Timers Baseball group sharing memories, including his participation on the 1953 American Legion Championship team from Schenectady. He is survived by his wife of 60 years, Marcia Cavanaugh Meaney, their five children, John (Marcy) Meaney of Saratoga Springs, Patrick (Susan) Meaney of Poughkeepsie, Elizabeth (Steve) Gutschow of San Diego, CA, Anne Solvason of Reno, NV, and Christine (Scott) Seabury of Fort Mohave, AZ. He is also survived by his 14 grandchildren, Megan, Allison, Nikki, Hayden, Shaun, Nicki, Keelyn, Tenaya, Thor, Grace, Jimmy, Maura, Brenna, and Tara. He is also survived by several nieces, nephews, and cousins. Jim was predeceased by his four brothers, Ray, Peter, Jack, and Bob. A memorial service will be scheduled for the summer in New York State.

The family of James H. Meaney created this Life Tributes page to make it easy to share your memories.

Send flowers to the Meaney family.