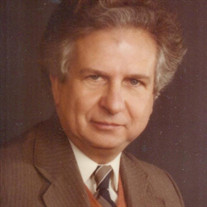 James Patrick O’Brien MD, 86, of Delmar, NY, passed October 12, 2018 at home surrounded by his family. James was born to Frank and Lillian O’Brien, August 2, 1932, in Troy, NY. He graduated from Albany High School and continued his education in the United States Air Force in Electronics School during his dedicated service in the Korean War. He graduated from Albany Pharmacy College with honors in 1960 and Albany Medical School with a Doctorate in Medicine in 1964. James continued his residency at Albany Medical Center for 7 more years specializing in neurosurgery. He was a member of the Alpha Omega Alpha Honor Medical Society, the congress of neurological surgeons and the American Board of neurological surgeons. He married Stella in 1956, and they lived together in Delmar, NY. Together they raised two children. James was a neurosurgeon until he retired in 1996 and was passionate about affecting the most positive change in people. He was a founding member of Albany Troy Neurosurgical Associates in 1971 and worked tirelessly to help his family and patients in body, mind and spirit. He was chief of neurosurgery at St. Peter's Hospital and served on the board of ethics as well. He loved spending time with his family and skiing, he had an unending quest for knowledge, a keen interest in science and nature, and a love for animals including many beloved pets throughout his life. He leaves as his legacy two children: Heather (James Smith) and Brendan. He also leaves to cherish his memory his grandchildren Cassidy and Ella O’Brien and Rachel and Julianna Smith, his sister Patricia Barnes (Wayne), Brother-in-law Robert Engel and numerous nieces and nephews. He was preceded in death by his sisters Catherine Spataro (Dr. Francis T), Lillian Wilson (James) and Virginia Engel. A wake is scheduled for Tuesday, Oct. 16th from 4 to 7 pm at Applebee Funeral Home. A Funeral Mass will be celebrated on Wednesday, Oct. 17th at 10 am at St. Thomas the Apostle Church, 35 Adams Pl., Delmar. The family requests that donations be made to Community Hospice Foundation, c/o Gift Processing Center, 310 So. Manning Blvd., Albany, NY 12208 or St. Jude Children’s Research Hospital, P.O. Box 1000, Dept. 142, Memphis, TN 38148-0142.

The family of Dr. James P. O'Brien created this Life Tributes page to make it easy to share your memories.