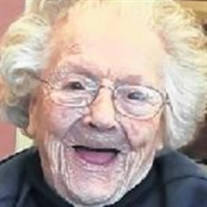 Jean C. Zembo, 109, passed away peacefully with her daughter, Lynn by her side on December 6, 2021. She was born on April 14, 1912, (the night the Titanic hit the iceberg) in a little house in West Dover, N.S. She came to America in April 1924 on the boat, The Silvia, and was a resident of Albany her remaining years. Her most recent residency was at the Teresian House for the past 14 years. Jean was a waitress for many years at Wager's Restaurant, which was on the corner of Quail Street and Western Avenue in Albany. Once she started her family in 1942, she was a stay-at-home mom until 1954, and then began working as a marketing analyst for Russell's Distributing Company. She remained there until her retirement in 1974. Jean married Joseph Zembo on August 5, 1935, and together they raised three children - Marjorie, James and Lynn. Jean and Joe celebrated 54 years of marriage. He passed away in June of 1990 at the age of 80. Marjorie is married to Gerald Smith and they reside in South Windsor, Conn. and Fort Pierce, Fla.; Lynn married John LaRose and they reside in Averill Park. James passed away in 2004. In addition to her son and husband, Jean was predeceased by her four brothers and three sisters, Weldon Morash, Lloyd Morash, Earl Cleveland, Aubrey Cleveland, Lillias Wilson, Gertrude Kleese and Marjorie Cleveland; and her grandson, John M. Kimmey Jr., who passed away in 2005. She is also survived by her four loving grandchildren, Michele J.Kimmey (Steve Dalton) of Eastham, Mass., Joseph V. (Sandra) Kimmey of Kapolei, Hawaii, Scott (Emily) LaRose of Averill Park, and Brian (Jill) LaRose of East Greenbush; six great-grandchildren, three great-great-grandchildren and several nieces and nephews. The family would like to thank the wonderful staff at the Teresian House, Carmel Gardens West, who treated Jean like their own mom. Their love and kindness to Jean will always be remembered. Relatives and friends may call from 8:30 to 10 a.m. on Wednesday, December 15, at The Tebbutt & Frederick Memorial Home, 633 Central Ave., Albany, with a funeral service beginning at 10 a.m. A Mass of Christian Burial will be celebrated at 11 a.m. on Wednesday in the Blessed Sacrament Church, 607 Central Ave, Albany. Interment will follow in Our Lady of Angels Cemetery, Colonie.

The family of Jean C. Zembo created this Life Tributes page to make it easy to share your memories.

Jean C. Zembo, 109, passed away peacefully with her daughter,...

Send flowers to the Zembo family.