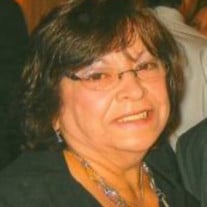 Joan A. (Siino) Lanahan passed away Tuesday morning, August 24, 2021 at St. Peter's Hospital. Born in Albany in 1943, she was the daughter of the late Benedict and Angeline (Ravida) Siino. Joan grew up in Albany along with much of her extended family. Her aunts, uncles, and cousins also lived on the same street which helped the family to remain so close over the years. She attended Hackett Middle School and then Albany High School, from where she graduated. At age 12, she met the love of her life, James E. Lanahan. Eventually the two were married and together, shared 52 years of blissful marriage until James' passing in 2014. Joan worked part-time as an aide at Hamagrael Elementary School, but spent most of her time at home, raising her family and helping her husband run his plumbing business. She loved the beach and their family trips to Hampton Beach became tradition. Joan loved visiting casinos, trying her luck on the day's favorite slot machine. Every year, Joan delighted in choosing and giving the perfect Christmas ornament to her family members. While her life was filled with many joys, nothing made her happier than holding the title of "Meema" to her grandchildren. As the matriarch of her family, Joan's love for her children and grandchildren helped to mold them into the family they are today. Her grandchildren were her pride and joy. Joan is survived by her two daughters, Lori (Brian) Rohan of Delmar and Kathleen (Todd) Shafer of Selkirk, her four grandchildren; Connor, Taylor, Drew, and Landon, her siblings, Gina (David) Carney of Nassau and John (Kathleen) Siino of Albany, her cousin and best friend, Florence (Tony) Santiago of Delmar, and many other friends and family, including cousins, nieces, and nephews. Along with her dear husband James, she was also preceded in death by two siblings, Annette Siino Hollis and Benedict Siino. A funeral Mass will be celebrated Monday, August 30, 2021 at 10 AM at St. Thomas the Apostle Church, 35 Adams Pl, Delmar. Inurnment will follow in Calvary Cemetery. In lieu of flowers, those who wish to remember Joan in a special way may consider a donation to St. Jude Children's Research Hospital, 501 St. Jude Pl., Memphis, TN 38105-9959.

Joan A. (Siino) Lanahan passed away Tuesday morning, August 24, 2021 at St. Peter's Hospital. Born in Albany in 1943, she was the daughter of the late Benedict and Angeline (Ravida) Siino. Joan grew up in Albany along with much of her extended... View Obituary & Service Information

The family of Joan A. Lanahan created this Life Tributes page to make it easy to share your memories.

Send flowers to the Lanahan family.