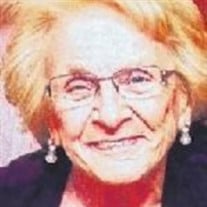 Joan Casale Piscitella, 82 of Troy, passed into eternal rest on Thursday, August 19, 2021, at the Hospice Inn at St. Peter's Hospital in Albany, surrounded by her loving family. Joan was born in Troy and was the daughter of the late Charles and Mary Riggione Casale; and the loving wife of the late Thomas J. Piscitella, who passed away in 1967. Joan had been employed by the New York State Assembly before becoming the city clerk of Troy from 1984-1994. Joan was involved in Troy City and Rensselaer County politics throughout most of her life. She enjoyed playing bocce at the ICC in Troy and was a member of the women's auxiliary at the ICC. Joan's love and passion in her life was being with her children, grandchildren, great-grandchildren and her many nieces and nephews. Joan was predeceased by her daughter, Regina (Roger) DaPrato. She is survived by her children, Domenica (Mark) Millington, Thomas (Angela) Piscitella, Giovona (Jim) Driscoll and her special addition Deana (Doreen) Smith-Casale. Joan was the loving grandmother of Matthew (Molly), Jenna (Pat), Giovanna (Brendan) Mark Steven, Christina, Nicholas (Lucia), Brianna, Joanna (Ryan), Meghan, Maria and James; and great-grandmother of five: Ella, Luca, Jack, Logan and Beau. Joan is also survived by her sister, Mary (Tiny) Valente. She was also predeceased by her sister, Nicki Ann Grande; and her brothers, Carmen, Chuck, Tony and Gennaro. The funeral service for Joan will be held on Monday at 11 a.m. in St. Anthony of Padua Church in Troy, where a Mass of Christian Burial will be celebrated by Father Richard J. Donovan OFM, Pastor. Relatives and friends are invited to attend and may call at the church on Monday from 9 until 11 a.m. Interment will be in St. Mary's Cemetery, Troy. Contributions in Joan's memory may be made to St. Jude Children's Research Hospital, 501 St. Jude Place, Memphis, TN, 38105. Arrangements by The Bocketti Funeral Home.

Joan Casale Piscitella, 82 of Troy, passed into eternal rest on Thursday, August 19, 2021, at the Hospice Inn at St. Peter's Hospital in Albany, surrounded by her loving family. Joan was born in Troy and was the daughter of the late Charles... View Obituary & Service Information

The family of Joan A. Piscitella created this Life Tributes page to make it easy to share your memories.

Send flowers to the Piscitella family.