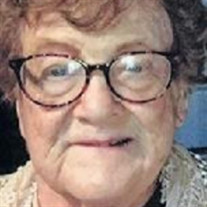 Johanna T. "Joan" Giordano, 84 of Rensselaer, passed away on Monday, April 18, 2022, at Upstate University Hospital in Syracuse, from complications following a tragic fire. Johanna was born on February 2, 1938, in Troy, a twin daughter one of 14 children to John and Anna Mary (O'Mally) McMahon. Joan worked at AT&T for many years prior to the birth of her children. After raising them, she went to work for Norton Company, and then went on to work as an accounts receivable clerk for Albany Mack Truck Sales for many years before retiring. Joan loved gardening, traveling with her husband, reading, and loved working with the children at Genet School (where they referred to her as Nana G), volunteering at St. Michael's Church, and spending time with her huge family. Joan was the beloved wife of 50 years to the late James Robert "Bob" Giordano; mother of James (Sandy) Giordano of East Greenbush and the late Christopher Giordano; and grandmother of Jared and Matthew Giordano, Loni Addison, and Taylor Cislo-Giordano. She was the proud sister of 13 siblings, Patricia McMahon, Elaine McMahon, Michael (Ellen) McMahon, Shelia and the late (Timothy) McKeon, Noreen (Thomas) Charette, Agnes (Frank) Barbalace and the late Catherine (Wayne) "Pete" Andrews, Mary (Henry) Viepert, Margaret (Donald) Blais, John (Delores) and Grace McMahon, Constance (Richard) Spens, James, and Joseph McMahon, Anna Francis, and Edmound McMahon. Joan is also survived by brothers and sisters-in-law, William Reinonehl, Barbara McMahon, Arthur Kling, Philip J. (Kathryn Ann) Giordano, Rebecca Anne Grobecker, Richard (Mary) Giordano, Mary Anne Ryan, Anthony (Donna) Giordano and the late Joan Ann (James) "Snap" Connell, Harry W. King, Robert A. Grobecker, and Timothy Ryan Joan is also survived by 61 nieces, nephews, and cousins. The family would like to extend our sincere thanks to the amazing staff at the Upstate University Burn Unit. Relatives and friends are invited to her calling hours on Thursday from 3-7 p.m. at the Wm. J. Rockefeller Funeral Home Inc., 165 Columbia Tpke., Rensselaer. Family and friends are also invited to the funeral services on Friday starting at 9 a.m. at the funeral home and then at 10 a.m. a Mass of Christian Death and Burial will be held in Saint Michael the Archangel Roman Catholic Church, 175 Williams Rd., Troy. In lieu of flowers, memorials may be made in Johanna's name to a charity of the donor's choice.

Johanna T. "Joan" Giordano, 84 of Rensselaer, passed away on Monday, April 18, 2022, at Upstate University Hospital in Syracuse, from complications following a tragic fire. Johanna was born on February 2, 1938, in Troy, a twin daughter one of... View Obituary & Service Information

The family of Johanna Giordano created this Life Tributes page to make it easy to share your memories.

Johanna T. &quot;Joan&quot; Giordano, 84 of Rensselaer, passed away on...

Send flowers to the Giordano family.