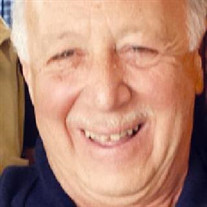 On Sept. 25, 2019, John Francis August (Johnny Boy) left this world in order to continue onto the next phase of his Galactic Voyage. John was born on Sept. 5, 1947 in Schenectady NY, the only child of Josephine (DiDonato) August and Joseph August. He is survived by his many friends and relatives most notably his cousin, Tom Nastars who served as John's caregiver and confidant during his past and current illnesses. John was a 1965 graduate of Mont Pleasant High School and he also attended Fulton Montgomery Community College. John was recently employed by Icahn Automotive Group. In his early years, John worked at Dave's Squire Shop in downtown Schenectady and he also managed their Glens Falls location. John's bartending skills took him to many of Schenectady's finest establishments including the Blue Apple, Luigi's Restaurant and Tavern on the Square. For a number of years John was the proprietor of the Grill Restaurant at Schenectady Muni Golf course. John also spent 6 years as a member of the 109th Air National Guard in the service of his state and country. Thanks to his friendship with Bob C. ("Creech") and Jimmy F. of Fox & Murphy's Sporting Goods, John became an accomplished skier and skied at various ski areas in both the States and Canada. In addition, John and his ski buddies spent many a New Year's Eve skiing and partying in Stowe Vermont. He was a past member of the Dutch Masters Golf league and for many years he, Jimmy F., Norm S. and Rit N. had a Saturday morning standing tee time at the NY State Golf Course in Saratoga Springs. John spent most of his holidays with the Dubb family including Barb D., Debbie and Carl L. and Cheryl and Rob C. He was very appreciative of their enduring hospitality, love and friendship over the years. John loved eating and was known for his delicate palate......ok, he was the pickiest eater we ever knew! John could be found on most Friday evenings with some of his pals and proprietors Barb and Mike N. at Slicks in downtown Schenectady. At other times you might find him in the company of Alfie I., Armand C. and Tony G. at Boulevard Bowl (they didn't bowl). Johnny also loved sipping on a VERY, VERY dry Beefeater martini, with olives....never a twist, at the annual Sue Nicolella Memorial Super Bowl Party with Ed P. and Mike K. (gone but not forgotten), Tom T., Bill S. and Bill J. and the rest of the "boys". In years gone by, John was a distinguished member-guest and food critic at the many delish dinner parties hosted by Mary Ellen O. and Patti N. John loved sailing and all things related to sailing including Jimmy Buffet music and his extensive wardrobe of Sperry Top-Sider boat shoes. For many years John and some of his close friends would attend the annual Boat show in Annapolis Maryland. John loved touring and critiquing the many sailboats at the show along with enjoying a few drams of Hendrick's Gin with Bill K., Dick S. and Rit N. and with new-found friends Les, Kim, Charlie and Tre. John's many sailing experiences culminated in 1980 with a two-week sailing odyssey through the Greek islands. With John at the helm and three of his friends acting as his mates the crew visited Hydra, Mykonos, Paros, Sifnos and several other islands. For many years the trip provided fodder for many stories, laughs and arguments as to whose retelling of the adventure was more accurate. John's unique personality was definitely an acquired taste. He gave no quarter to insincere folk or blowhards. For those of us who knew John well, we will miss his rapier-like wit, his dry sense of humor, his slow and deliberate manner (he could take up to an hour to eat a plate of chicken wings) and his lovable curmudgeonly-like demeanor.....he will HATE this write-up. John overcame a number of health issues during the last three years of his life and spent his last six months in various hospital and nursing home facilities. He fought each new battle with courage and acceptance and with few complaints. When John found out that his condition was terminal he accepted it with a calmness and aplomb that few of us would be capable of. John has generously decided to bequeath his remains to Albany Medical Center for research purposes.

On Sept. 25, 2019, John Francis August (Johnny Boy) left this world in order to continue onto the next phase of his Galactic Voyage. John was born on Sept. 5, 1947 in Schenectady NY, the only child of Josephine (DiDonato) August and Joseph August.... View Obituary & Service Information

The family of John F. August created this Life Tributes page to make it easy to share your memories.

Send flowers to the August family.