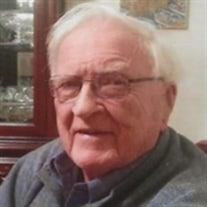 John Watson Carswell, 90, of Slingerlands, NY, passed away peacefully on Wednesday, February 23, 2022, at St. Peter&#8217;s Hospital in Albany, New York. For the past 23 years, he was the beloved husband of Helen (O&#8217;Hanlon) Carswell. John... View Obituary & Service Information

The family of John W. Carswell created this Life Tributes page to make it easy to share your memories.

Send flowers to the Carswell family.