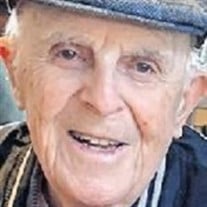 The Hinds family mourns the passing of John C. Hinds, of Loudonville, who died peacefully on February 10, 2021, in the Community Hospice Inn at St. Peter's Hospital after a short illness. He was born on December 19, 1925, to Ruppert and Marion Straub Hinds of Syracuse. He was predeceased by his sisters, Shirley Chapman and Patricia Mahar; and his son John C. Hinds Jr. He is survived by his wife of 74 years Stephanie Hinds; daughters, Susan (Martin) Friedman of Fredonia, Pa. and Anne Hinds of Boca Raton, Fla.; and his son James (Cathy) Hinds of Delmar. He is also survived by his grandchildren, Lisa (Brian) Edge, Molly (David) Barsic, Anne Friedman, Alex Hinds, Laura (Dylan) Steyer, Samantha, Shawna and Sawyer Bilton; and great-grandchildren, Natalie, Caitlin and Luke. John grew up on the north side of Syracuse where he met his future wife. He was an Eagle Scout and joined the Marine Corps in 1944, shortly after graduating from high school, fighting in the battle of Iwo Jima and serving in occupied Japan. He attended Syracuse University, earning a bachelor's degree while working and raising his family. After his discharge from the Marine Corps, John was hired as an installer for Western Electric, and remained with the Bell System or its affiliates his entire career, retiring as a district manager with Lucent Technologies after more than 45 years of service. He took great pride in his involvement with the communications team for the 1980 Olympics in Lake Placid. Following his retirement, John volunteered his time with the Telephone Pioneers and the Albany Police Athletic League. To his family he was a beloved husband, father and devoted grandfather who was an example of what it means to be a model citizen, a profoundly decent, generous and sincere man. He was a loyal friend who supported countless charities. John was a deeply religious man and a congregant of St. Pius X in Loudonville for more than 50 years. He enjoyed feeding his backyard birds, fishing and summers with his family on Brant Lake. His grandchildren will cherish memories of his constant love, support and laughter. We all feel so lucky to have him in our lives. He will be dearly missed. His service will be held on August 14, 2021, in St. Pius X Church. In lieu of flowers, donations may be made in John's name to the Wildwood Foundation, 2995C Curry Road Extension, Schenectady, NY, 12303 or at wildwood.edu. Arrangements are provided by the Daniel D. Purcell Funeral Home.

The Hinds family mourns the passing of John C. Hinds, of Loudonville, who died peacefully on February 10, 2021, in the Community Hospice Inn at St. Peter's Hospital after a short illness. He was born on December 19, 1925, to Ruppert and Marion... View Obituary & Service Information

The family of John C. Hinds Sr. created this Life Tributes page to make it easy to share your memories.

The Hinds family mourns the passing of John C. Hinds, of Loudonville,...

Send flowers to the Hinds family.