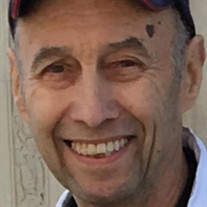 John Julius Klopstock passed away peacefully on Saturday, January 30, 2021. He was 81 years old. He was born, September 19, 1939 in Flushing, New York. He was the only child of Leila Billington Klopstock and Dr. Kurt Klopstock. Growing up in Bay Shore, John developed his love for sports and the outdoors. His parents felt travel was an important part of one's education which he embraced the rest of his life. John attended Admiral Farragut Academy and Bucknell University. He also enlisted in the US Marine Corp Reserves. In 1958 John married Holly Haskel Grande in Nyack, NY; they were blessed with two children, Kim and Kris­Jon. He made his career first, as GM and then VP for Cibro Petroleum Refinery at the Port of Albany. John served on different boards in the community such as the Salvation Army, Albany Medical Center and the American Dance Center. He was a long-time member of the Fort Orange Club, Saratoga Little Club and a dynamic leader of the MYF (Methodist Youth Fellowship), which included young people of all faiths. He played and coached football and was involved in Pop Warner football. He was an instrumental member of the special commission that organized the Albany Tricentennial yearlong celebration in1986. When he retired, he became a consultant for Oldcastle Materials Inc. In 1989 he married Vivian Urdaneta and together continued to explore the world with their travels and adventures. Climbing Kilimanjaro, experiencing safari trips and navigating down the Middle Fork of the Salmon River were highlights of their trips. He loved sailing, tennis, listening to music, singing, whistling and dancing. John recovered from several detrimental illnesses, and due to his God given attributes of self-determination, stubbornness, positive attitude and the love and care of his family, he overcame them all. John and Poppie for his grandchildren and great-grandchildren, is survived by his wife Vivian Urdaneta; his children Kim Klopstock, Kris-Jon Klopstock, Lizette Orozco, Alan Orozco; his grandchildren Talara Hedgpeth, Dr. Sierra Klopstock Wait, Kyle Klopstock, Rebecca Malventano, Vittoria Orozco, Francesco Malventano, Jorge Orozco, Alan Orozco, and 5 great grandchildren. The family would like to extend a special thank you to John's home caregivers and those at Saratoga Hospital for all their love, comfort and compassion. A Funeral Mass will be held at St. Clement's Church, 231 Lake Ave, Saratoga Springs, NY 12866, on Saturday, February 13 at 10:00 am. Mass will be celebrated by Father James Ebert.

John Julius Klopstock passed away peacefully on Saturday, January 30, 2021. He was 81 years old. He was born, September 19, 1939 in Flushing, New York. He was the only child of Leila Billington Klopstock and Dr. Kurt Klopstock. Growing up in... View Obituary & Service Information

The family of John J. Klopstock created this Life Tributes page to make it easy to share your memories.

Send flowers to the Klopstock family.