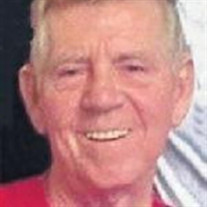 On May 12, 2020, John "Jack" Vogel, beloved husband, father, grandfather, great-grandfather and uncle passed away at the age of 84 at his daughters home in Houston, Texas where he was cared for the past five years. He is reunited in Heaven with his wife Maureen; his parents, Paul and Eleanor; and his two sisters, Rita Walton and Pauline Pettit. Jack is survived by his children, Carol Kriegbaum (Karl), Susan Vogel (Bryant Gould), and Paul Vogel (Lori); seven grandchildren, Emily, Alexandra, Nicholas, Katie, Maxwell, Sean and Madison; and one great-grandchild Zachary. He is also survived by several nieces and nephews. Jack grew up in Green Island where he graduated from Heatly High School. He then joined the United States Marine Corps where he served proudly in Korea. His pride in the Marine Corps would last a lifetime and was evident in his displays of flags, hats and other memorabilia. Like his father, Jack worked for Manning Paper Co. in Green Island until his retirement. Jack and Maureen raised their family in Poestenkill and Averill Park where they attended St. Henry's Catholic Church. Ultimately, they moved to Texas to be near their daughters. Jack will be remembered for his sense of humor, boundless energy, outgoing friendliness and his love for his family. He faced his health challenges with courage, grace and humor. He will be missed by all who knew him. We are grateful to the Veterans Administration Home Based Primary Care team in Houston, Varco Hospice and his dear caregivers Elvira, Margarita and Berna all of whom helped to support us in caring for him at home in his final years. Memorial services in Texas and New York will be scheduled when we can gather to celebrate Jack's life in proper style.

On May 12, 2020, John "Jack" Vogel, beloved husband, father, grandfather, great-grandfather and uncle passed away at the age of 84 at his daughters home in Houston, Texas where he was cared for the past five years. He is reunited in Heaven with... View Obituary & Service Information

The family of John Paul Vogel created this Life Tributes page to make it easy to share your memories.

Send flowers to the Vogel family.