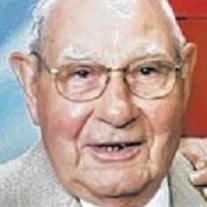 Joseph Armand Giroux passed away on September 5, 2021, to be with his Lord and Savior, family, and friends. Joseph was born on September 30, 1928, to the late Donalda and Eugene Giroux in Cohoes. Joseph retired from Smith Paper Company after 30 years as a receiver. He was much-loved and respected by his co-workers. Joseph was proud to have served in the Army from 1948-1952 and was a Korean War era veteran who was stationed in Berlin, Germany as part of the post-World War II Occupation Force. He was honorably discharged at the rank of sergeant first class - a testament to his exemplary service and leadership abilities after only four years of service. Joseph was a member of the Halfmoon American Legion and a past member of the Halfmoon Fire Department. He leaves behind his loving wife, Barbara, of 67 years; a cherished and loving daughter, Debra Barnhill and Curt of Salem, S.C.; a grandson, Whitney Nattell and Heather of Hardwick, Vt.; and sisters, Georgette Larkin and Al of Troy, and Yvette McMahon of Brockport, Maine. Joseph's brothers, Henry Giroux and Leo Giroux, predeceased him. His nephew, Robert Giroux (Leo's son), predeceased him last year as well. Joseph is survived by several nieces and nephews. The family would like to thank the following: Dr. James L. Phillips, Cardiologist; Dr. Rahul Patel, Eye Surgeon; Landmark Home Health Care; Eddie Visiting Nurses and Therapist, Sara Ibrahim, C.N.A.; all the wonderful doctors and nurses in the Ellis Hospital Cardiac Wing; and lastly, the Coburg Village Retirement Community for their respectful love, kindness, and support. There will be no calling hours honoring Joseph's wishes. A Mass of Christian burial is planned for 1 p.m. on Thursday, September 9, in St. Mary of the Assumption Church in Waterford. Interment will follow in St. Joseph's Cemetery, Waterford. Those who wish to make a memorial contribution may do so by contributing to St. Jude Children's Research Hospital or any animal shelter of your choice.

Joseph Armand Giroux passed away on September 5, 2021, to be with his Lord and Savior, family, and friends. Joseph was born on September 30, 1928, to the late Donalda and Eugene Giroux in Cohoes. Joseph retired from Smith Paper Company after... View Obituary & Service Information

The family of Joseph Armand Giroux created this Life Tributes page to make it easy to share your memories.

Send flowers to the Giroux family.