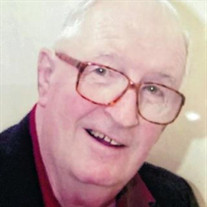 Joseph R. Langan, Sr., 88, of Loudonville passed away peacefully on Wednesday, March 9th at Daughters of Sarah Nursing Center where he had resided since December. Joe was born July 14, 1933 in Carbondale, PA, a son of John F. and Mary A. (Schofield) Langan graduating from Whitesboro High School, class of 1951. Upon taking an interest in the ambulance service and funeral business from a neighboring funeral home, he attended the former Simmons School of Mortuary Science in Syracuse. After graduating, he returned to his home town of Utica where he worked for the Friedel Funeral Home in Utica for over 13 years. After a brief employment at the Heintz Funeral Home in Utica, he relocated his rather large family to the small hamlet of Central Bridge where he purchased the former Clark Funeral Home on North Main Street and operated as Langan Funeral Home. He became active in the community serving as Treasurer of the newly formed Central Bridge Water District and answered one of four phones for the Central Bridge Fire & Rescue Squad. Joe provided ambulance service to the Central Bridge area prior to the formation of the Central Bridge Rescue Squad. He was active in the Democratic Party; belonging to the Town of Schoharie Democratic Club, serving as Schoharie County Committeeman and Treasurer and also served as Clerk of the Board of Supervisors for 2 years. He was a former member of the Central Bridge Civic Association, the Central Bridge Fire Department, served on the former Schoharie County Community Hospital Board of Directors and the Advisory Board for the former State Bank of Albany. He also served on the Board for Rehabilitation Support Services helping to secure the first client house in Schoharie. Joseph would switch professions and began working for NYS Dep't of State, Division of Cemeteries and later, for Division of Licensing Service, retiring in 1994. A lifelong devout Catholic, Joe was a communicant of several Catholic Churches including the former St. Joseph's R.C. Church (serving on the Parish Council) and currently, Blessed Virgin Mary of Czestochowa in Latham. Joe enjoyed spending winters in Jensen Beach, FL and taking cruises with Donna to Alaska, Europe and Bermuda. He and Donna also lived in Bolton Landing for several years enjoying the Lake George region. Survivors include his longtime companion, Donna Gallo Langan of Loudonville, his 5 children; Joseph (Julie) Langan, Jr. of Town of Wright, Deborah (William) Capron, of Glenville, Jeffry (Kathy) Langan of Green Bay, WI, Michael (Julie) Langan of Schoharie, and Brian (late June) Langan of Glenville, 8 grandchildren, 8 great-grandchildren, his niece, Melinda (Arnie) Snell Buza and his cousin, Jimmy Langan. Besides his parents, Joe was predeceased by his sister, Rosemary Snell and a niece, Nadine Snell Gray. A Mass of Christian Burial will be celebrated on Thursday, March 17, 2022 at 11:00 a.m. at the Blessed Virgin Mary of Czestochowa, 250 Old Maxwell Rd., Latham, NY. Visitation will be held prior to the service from 10–11 a.m. at the church. Interment will follow in St. Agnes Cemetery in Menands. Memorial contributions may be made in memory of Joe to the Williams Syndrome Association, 560 Kirks Blvd., Suite #116, Troy, MI 48084-4153.

Joseph R. Langan, Sr., 88, of Loudonville passed away peacefully on Wednesday, March 9th at Daughters of Sarah Nursing Center where he had resided since December. Joe was born July 14, 1933 in Carbondale, PA, a son of John F. and Mary A. (Schofield)... View Obituary & Service Information

The family of Joseph R. Langan Sr. created this Life Tributes page to make it easy to share your memories.

Send flowers to the Langan family.