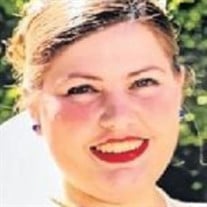 Kayla M. Martin, 30, passed away on February 22, 2022, at the Brigham and Women's Hospital in Boston, Mass. after a courageous battle with Myelodysplastic Syndrome (Leukemia) diagnosed in September, 2020. She was born September 26, 1991 in Clearwater, Fla., daughter of Monique L. (Brouard) Burt. Kayla grew up in Connecticut until her middle school years, and she was one of three daughters in her family. She moved to Raymond, N.H., and was a graduate of Raymond High School, class of 2009, where she was a member of the chorus. She met Charles Martin while in her high school years and they began dating. They were committed to each other through high school and even long distance while Charles attended Rensselaer Polytechnic Institute. While celebrating Charles' college graduation in 2013, Charles proposed to Kayla. Kayla happily accepted and on May 29, 2015, they were married at St. Joseph Church in Epping, N.H.. Before being married, Kayla worked as a store manager for Walgreen's in Lee, N.H. and in New York. In 2016, her desire for something more led her to her passion to work with children, as she became a daycare teacher. In 2018, she made the move into working with autistic children as a teacher's aide at St. Colman's Home. In 2020, she took a medical leave and was striving to return after having her bone marrow transplant. Kayla enjoyed attending church service officiated by Father Ed at the Christ Sun of Justice at the Chapel & Cultural Center at RPI. Charles formed a very close bond with his Physic Group while at RPI that welcomed and adopted Kayla as one of their own. The Physics Group and spouses are still close today and will miss Kayla dearly. She was a very artistic and creative individual enjoying many crafts such as crocheting and coloring. Other hobbies included doing jigsaw puzzles, legos, and Sudoku. She also enjoyed playing video games like Mario and Zelda on her gamecube and switch and Minecraft. She was amazing with children and was also an avid animal lover. Kayla is survived by her devoted husband, Charles Martin of Troy; mother, Monique Burt of Raymond, N.H.; sister, Breanna Burt of Raymond; sister, Kimberly Burt of Raymond; and her two cats, Caddie and Evie. Calling hours will be held on Friday, March 4 from 5 - 8 p.m. at the Brewitt Funeral Home, Raymond, N.H. A Mass of Christian Burial will be celebrated on Saturday March 5 at 10 a.m. at St. Joseph Church, 200 Pleasant St., Epping, N.H. Flowers are acceptable or donations may be made in her memory to any of the following: Leukemia & Lymphoma Society (LLS), or Dana-Farber Cancer Institute at www.dana-farber.org/gift.

Kayla M. Martin, 30, passed away on February 22, 2022, at the Brigham and Women's Hospital in Boston, Mass. after a courageous battle with Myelodysplastic Syndrome (Leukemia) diagnosed in September, 2020. She was born September 26, 1991 in Clearwater,... View Obituary & Service Information

The family of Kayla M. Martin created this Life Tributes page to make it easy to share your memories.

Send flowers to the Martin family.