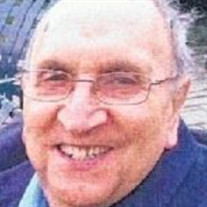 Leo S. Pusatere, 94 of Troy, passed into eternal rest on December 12, 2021, at the Van Rensselaer Manor surrounded by his loving family. Leo was born in Troy and was the son of the late Rosario V. and Antonina DiNova Pusatere. Leo was married to the late Margaret Triolo Pusatere for 47 years. He worked for the family business, R. Pusatere Inc., for over 50 years. His father had him loading and unloading the trucks alongside his older brothers, and at the same time had him going to the Menands Regional Market to purchase the fresh produce. He learned the business at an early age. He then grew the market to one of the most formidable wholesale and retail businesses in the northeast. His saying was that he never met a customer that he didn't like and there was never a customer that didn't like him. Leo was also a veteran in the United States Army during World War II. He was a great Jitterbug dancer and won prizes all the time. He liked to play cards at his local haunts, travel to Atlantic City and Vegas, spend winters in Florida and go on his Casino Riverboat cruises. He was involved in the Troy Boys and Girls Club, Italian Community Center in Troy and Albany, Elks Club and Kiwanis Club. Leo is survived by his children, Nina P. Amadon, Leo J. Pusatere and his wife Margaret, and Charles T. Pusatere. He is also survived by his grandchildren, Stephen (Kristin) Amadon, Jason (Jamie) Amadon, Nicole (Kevin) Craghead, Dustin (Amanda) Pusatere, Gabrielle (Gregory) Bankowski, Amber (Zachery) Lettko, Leo J. Pusatere III, and Mark (Jasmine) Pusatere; and his great-grandchildren, Caroline, Stephen and William Amadon, Kati Craghead, Justin and Jayden Amadon, Londyn and Daxton Pusatere, and Grayson Bankowski. Leo was predeceased by his siblings, Mary Sapone, Salvatore Pusatere, Joseph Pusatere, Rosario Pusatere Jr., Cosimo Pusatere, Josephine Sgarlata, Anne Canestrari, Ellen Deeb and Frank R. Pusatere. The funeral service for Leo will be held on Friday, December 17, at 12:30 p.m. in St. Jude The Apostle Church, 43 Brookside Ave., Wynantskill, where a Mass of Christian Burial will be celebrated. Relatives and friends are invited to attend and may call at the church from 10 a.m. until 12 p.m. Interment will be in St. Agnes Cemetery in Menands. Due to the new regulations by the CDC, facial coverings are required in the church. In lieu of flowers, please make a donation in Leo's name to the Troy Boys & Girls Club, 1700 7th Ave, Troy, NY, 12180.

Leo S. Pusatere, 94 of Troy, passed into eternal rest on December 12, 2021, at the Van Rensselaer Manor surrounded by his loving family. Leo was born in Troy and was the son of the late Rosario V. and Antonina DiNova Pusatere. Leo was married... View Obituary & Service Information

The family of Leo S. Pusatere created this Life Tributes page to make it easy to share your memories.

Send flowers to the Pusatere family.