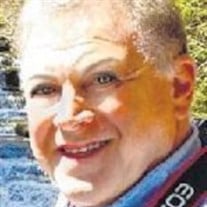 Louis "Lou" J. Suarato passed away on January 18, 2021. He was the beloved husband of 30 years of Ann Marie Franke Suarato; adoring father of Alison L. Suarato and Benjamin Suarato (Sarah Sonies); beloved brother of JoAnn Suarato, Georgette Maddalena and Sandy Suarato; and brother-in-law of Stephen Franke and Frances Franke, Joanne (Franke) Van Vlack and John Van Vlack, the late Mary Angela Franke. He adored his nephews and nieces, Maran (Franke) Person, the late Edward Person Kristin (Franke) Stalker and Michael Stalker, Joseph VanVlack, Tara (Maddalena) Mazzarella and Vinny Mazzarella, Kim (Maddalena) Milano and Marco Milano. His great-nephews and nieces, Maxwell Person, Zachary Person, Vince Mazzarella, and Luca Mazzarella, Matteo Milano and Valentina Milano, brought him such joy and knowing his newest niece, Francesca Marie Stalker arrived safely brought him joy as well. He is also survived by his former spouse Dorah Rosenzweig, mother of Alison and Ben. Lou was one of the kindest gentlest men with a love for the ocean, fishing, baseball, folk rock, Star Wars, birds, astronomy, family and so much more. He had a successful career in the financial services industry, as a trader with a local bank and then on to Drexel Burnham Lambert first as operations administration director and then as part of the final crew closing down the firm as the financial giant fell, then on to start an international trust company for Nomura Securities. He was proud of his accomplishments and reveled in his global experiences. After returning to the Capital Region to be closer to his children and to start a new career, he achieved one of his lifelong goals of finishing his college degree. Even on crutches, he always attended his astronomy classes with "Tucker" who expanded his horizons with a new love of astronomy. Many cold nights at the Landis Arboretum, one of his many telescopes in tow, he marveled at the stars. His favorite times were sharing sights of the moon or the rings of Saturn especially with children. He loved his weekend writings to post the Skywatch Line, his last one posted for 1/20 and 1/21. The stars and teaching brought him purpose and joy. He also had a passion for birds, painstakingly waiting for the perfect picture to capture their beauty and freedom. He took countless rides to Thatcher Park to watch the "kettles" in the autumn or just to marvel at its majesty. He will be sorely missed by those of us who loved him and those of you who simply enjoyed all the things he selflessly shared. There are few true kind souls in this world and Lou was one of them. He made the world a better place. Memorial services for Lou will be celebrated on Friday, January 22, at 11 a.m. in the Parish of Mater Christi, 40 Hopewell St., Albany. Masks, social distancing and occupancy restrictions will be observed. The Mass will be live-streamed at http://www.youtube.com/c/parishofmaterchristi. In lieu of flowers, memorial contributions may be made in Lou's memory to the Mohawk Hudson Humane Society, 3 Oakland Ave, Menands, NY, 12204 Online condolences may be offered to Lou's family at danielkeenanfuneralhome.com.

The family of Louis Suarato created this Life Tributes page to make it easy to share your memories.

Send flowers to the Suarato family.