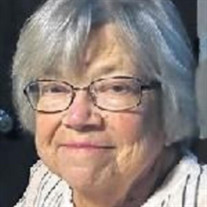 Marianne Osborn Gould, 84, passed away peacefully on August 31, 2021, surrounded by her loving children. Marianne is survived by her son Daniel (Pam) Gould, and her other eight children, Mary (Jack) Hayes, Anne (Geoff) Wolfgang, Patricia (David Pascarella), Michael, Geraldine, Theresa (Jim) Shear, Nancy (Steve) Novotny, Stephanie Gould; 27 grandchildren and five great-grandchildren. She is also survived by her sister Barbara Osborn; her brother Joseph (Carol) Osborn; and many nieces, nephews, relatives and friends. Marianne was predeceased by her dear son-in-law Geoffrey Wolfgang. The daughter of Joseph and Helen Osborn, Marianne grew up in Schenectady and Albany. She graduated from Vincentian Institute and The College of Saint Rose. She was a devout Catholic whose faith guided her throughout her life. Marianne singlehandedly raised her children while working in the demanding occupation of nursing administration at both Eden Park and Teresian House. As full as her heart and home were, there was always room for one... or 12... more. Despite long and exhausting workdays, she insisted that her family sit down to dinner every night to her admittedly mediocre cooking. Conversation was limited to "current event or jokes" which always led to laughter. Perhaps to maintain her sanity, no singing was allowed at the table. But singing was encouraged everywhere else, while washing dishes, bath and bedtimes, and road trips. Marianne had a fine voice and sang for many years with the church choir. Marianne created an environment of humor, warmth and stability for her children and The Outlaws, and taught them to have faith, a sense of community and to be kind. Marianne knew the secret to life - the simple pleasures - game night, picnics, ice cream and trips to her beloved ocean. She was a voracious reader, loved her Yankees and enjoyed the N.Y. Times Sunday crossword. Marianne was a lifelong Jeopardy fan who rarely missed an episode. She knew all the right questions. While she may not have given her children all the answers to life's questions, she taught them how to figure things out for themselves. She was the best audience for a good joke and spent many hours giggling with her kids and grandkids. Marianne sewed and knitted in her "spare" time and gave each child and grandchild a Christmas ornament which she carefully chose/made to celebrate important events because she paid attention and wanted to honor all of their achievements. Marianne will be profoundly missed, but her impact will always be felt by those who worked with her, socialized with her, sang with her, laughed with her and who had the rare honor and privilege to be raised by her. Relatives and friends are invited to visit with her family on Tuesday, September 7, from 10 a.m. to 12 p.m. in the Parish of Mater Christi, 40 Hopewell St., Albany. prior to her funeral Mass at 12 p.m. Inurnment will follow the Mass in St. Agnes Cemetery, Menands. In lieu of flowers, donations may be made in Marianne's name to Kelleigh's Cause, P.O. Box 127, Manlius, NY, 13104 or at www.kelleigh.org.

The family of Marianne Gould created this Life Tributes page to make it easy to share your memories.

Send flowers to the Gould family.