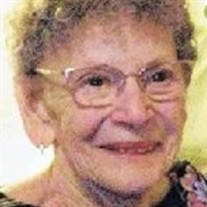 Marie Waidelich, 84, passed away peacefully at her home in the Beverwyck on Friday, March 11, 2022. Marie was born in Manhattan and lived in Astoria, Queens, until she married. She was the oldest daughter of the late Michael and Josephine (Grasso) Giampietro; and sister of Katherine Redmond and Peter Giampietro. She married Walter C. Waidelich on December 14, 1957, and moved to Boise, Idaho and several other locations in that part of the west. Marie was somewhat of a pioneer in that she and her husband left the city and lived in what was then considered remote parts of our country before the Interstate highways were built. Her first home in Idaho was at the end of a dirt road in a forest service camp with a mule skinner and a team of mules used to carry supplies. She went from "concrete sidewalks to dirt trails!" She saw elk, moose, bear, and mule deer in the wild. Marie and her husband eventually moved back east to be closer to family and settled in the Delmar area with their three children, Joann, Linda, and Butch. Marie focused on raising her three children. When they all became school age, she worked as a noon-hour aide at the Hamagrael Elementary School in the Bethlehem Central School District. She worked there for 20 years, retiring in 1992 to spend time with her husband. Marie and her husband enjoyed cruises to Alaska, through the Panama Canal, around the Baltic Countries and the Caribbean Islands. They also visited Sicily, where Marie's mother was born, for a two week tour of the island. She particularly loved boating with her sister in the British Virgin Islands and the time she spent at the ocean in Delaware with family. In the winters, she enjoyed skiing or just socializing with "The Top of the Hill Gang" at Jiminy Peak and going with the 70+ Ski Club on trips to Okemo, Vt. and Quebec. Marie is survived by her husband, Walter C. Waidelich; daughters, Joann Waidelich and Linda Meany (John); son, Walter "Butch" C. Waidelich Jr. (Liz); eight grandchildren and nine great-grandchildren. Our family would like to thank Rondah, Debbie, Shana, Ty, Sylvana, and all the other caregivers and Hospice staff who comforted Marie. Relatives and friends are invited to visit with her family on Tuesday, March 15, from 3-6 p.m. in the Daniel Keenan Funeral Home, Inc., 490 Delaware Ave., Albany. Her funeral Mass will be celebrated on Wednesday, March 16, at 9:30 a.m. in St. Francis of Assisi Parish, 391 Delaware Avenue. Entombment will follow the Mass in the mausoleum of Our Lady Help of Christians Cemetery, Glenmont. Memorial contributions may be made to the Community Hospice Foundation, 310 S. Manning Blvd., Albany, NY, 12208.

Marie Waidelich, 84, passed away peacefully at her home in the Beverwyck on Friday, March 11, 2022. Marie was born in Manhattan and lived in Astoria, Queens, until she married. She was the oldest daughter of the late Michael and Josephine (Grasso)... View Obituary & Service Information

The family of Marie Waidelich created this Life Tributes page to make it easy to share your memories.

Marie Waidelich, 84, passed away peacefully at her home in the...

Send flowers to the Waidelich family.